August 28, 2011 by Jessica Burshtynskyy
"Like" the Patheos Catholic Page on Facebook to receive today's best commentary on Catholic issues. 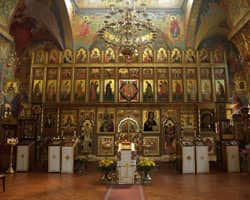 "What should I expect? What will be different?"

I frequently hear these questions from my Latin Catholic friends after I invite them to attend Divine Liturgy. Over the course of several centuries, the various Byzantine Catholic churches have all come back into communion with the pope of Rome, and they have brought with them a rich liturgical and theological tradition that has its origins in Constantinople. The best way to experience this tradition is to attend a Divine Liturgy, but here are five basic things every visitor should know.

Size
Eastern Catholic parishes tend to be much smaller than Latin Catholic parishes. Rather than a few thousand families, there may only be a few hundred, or even less. It is not uncommon for the priest to know all the parishioners by name, so introduce yourself! My experiences when visiting new parishes have been that the people are extremely welcoming and helpful. Eastern Catholic parishes are also used to visitors from other Catholic churches, so feel free to ask questions of the laity or the priest, and if there is any community activities following liturgy (coffee is common) join in!

Iconostasis
The iconostasis is simply a screen of icons that separates the nave from the sanctuary. Christ is always to the right of royal doors (the main doors in the middle), and he is our gateway to heaven. Other traditional icons on the iconostasis all have deep theological meanings, for example, the Theotokos with Christ and the Mystical (Last) Supper. Iconography has been used for centuries as a means of communicating theology with the use of images. Especially in the early days of the church, when many could not read, this was extremely beneficial.

Each of the icons in the church has multiple layers of meaning, but all communicate the central mystery that, as St. Athanasius of Alexandria stated: "God became Man, so that we might become like God." Occasionally a parish, especially a mission parish that uses a Latin Catholic church, may be missing an iconostasis, but the vast majority of parishes will have them. Some will be completely opaque, basically a wall with painted icons. Others you may be able to see through in between the icons.

Kneeling
Kneeling has a very interesting history in the Eastern Catholic Churches. In most parishes, no one will kneel during the sanctification of the gifts. Please do not mistake this for a lack of respect for the Eucharist. Rather, traditionally kneeling is seen as a sign of penance, of sorrow, in Eastern Christianity. Consequently, on a Sunday, the day of the resurrection, it would be inappropriate to kneel. Often in these parishes the people will bow their heads, or bow completely from the waist, and make the sign of the cross to show their respect. There are some parishes, however, where people will kneel. This kneeling is largely borrowed from the Latin traditions, and may occur in areas where the people were heavily influenced by Western Christianity, either in the United States or their countries of origin. There are other parishes where some will kneel and some will stand. If you are attending a Presanctified (Lenten) Liturgy, however, since it is a time of penance, be prepared to kneel a great deal!

Eucharist
The priest will present the Eucharist as the (leavened) consecrated bread dipped in the consecrated wine. When you approach to receive communion, tilt your head back, open your mouth wide, do not stick out your tongue, and do not say anything. The priest is the only one who speaks the prayer, and then he will place the Eucharist in your mouth. It is also common, especially on major feast days, to have something known as the antidoron following liturgy.

This is blessed bread left over from the prosphora (bread from which the Eucharist is cut) from which everyone may partake. This bread is meant to impart blessing and maintain community among all those who are in attendance, even those who cannot receive the Eucharist.

If it is your first liturgy, it may be overwhelming. The liturgy is usually sung, and combined with the iconography and incense, it can be quite the feast for the senses! Participate as much as you can, try to follow the books, and experience one of the ancient liturgies of the Catholic Church. It is a wonderful window into the spiritual life of the Eastern Christian. Hopefully you will want to return time and again!