August 04, 2011 by Russell Shaw
"Like" the Patheos Catholic Page on Facebook to receive today's best commentary on Catholic issues. 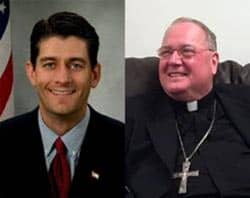 Heat, not light, is the usual fruit of political passion. How refreshing, then, that some significant light on the vexed question of Catholics in politics managed to break through amid an ugly little controversy a while back. With another election year hard upon us, it's worth reflecting on what transpired then.

In May, some 80 professors teaching at assorted Catholic colleges and universities whipped up an argument with a letter protesting the Catholic University of America's decision to have Speaker of the House John Boehner (R-OH) as commencement speaker. But just when it seemed least likely, somebody actually said something sensible.

Credit Archbishop Timothy Dolan of New York, president of the U.S. Conference of Catholic Bishops, with that. Although he wasn't speaking about the Boehner controversy, his words—in a letter to House budget committee chairman Paul Ryan (R-WI)—clearly did apply there.

Thanking Ryan for assurances of "continued attention to the guidance of Catholic social justice" in budget negotiations, Archbishop Dolan said this: "The principles of Catholic social teaching contain truths that need to be applied. Thus, one must always exercise prudential judgment in applying these principles while never contradicting the intrinsic values."

And then: "We bishops are very conscious that we are pastors, never politicians....As the Second Vatican Council reminds us, it is the lay faithful who have the specific charism of political leadership and decision."

Archbishop Dolan was neither toeing the GOP line on the budget nor was he condemning it. He was saying that, assuming they're committed to the principles of Catholic social doctrine, lay people with appropriate expertise—not bishops or the Church as such—are the ones who should be arguing for and against specific policy positions. (Ryan and Boehner are both Catholics.)

On that basis, Democrats and Republicans in Congress—and college professors too -- are free to battle it out among themselves. But it's implicit in the Archbishop's words that they aren't free to say, as the college professors said of Boehner, that an opponent's views on matters of prudential judgment are "at variance from one of the Church's most ancient moral teachings"—in this case, concern for the poor.

If that leaves you wondering: no, saying this doesn't open the door to the pro-choice position on abortion (or embryonic stem cell research or same-sex marriage or assisted suicide). Here, fundamental moral principles clearly rule out support. The question here, however—a very different one—is how to shape a budget that serves the common good. That's devilish hard work and necessarily open to a variety of opinions, as the 80 professors should know.

Archbishop Dolan's comments appear to signal a helpful new approach to political questions by the American bishops. If that's so, then perhaps we will be spared some of the headaches of the past in the political season ahead.

Ever since the 1970s, the national bishops' conference has saluted the approach of election years with statements outlining what it considered to be the political responsibilities of Catholic voters. Fair enough.

Unfortunately, those statements rather often erred by pronouncing on prudential questions that Archbishop Dolan concedes are beyond the pastoral competence of bishops. Confusion, not enlightenment, was the result. (This tangled history is reviewed at length in J. Brian Benestad's illuminating new introduction to social doctrine Church, State, and Society published by the Catholic University of America Press.)

If the Dolan Doctrine means the bishops' conference henceforth means to concentrate on forming consciences by enunciating doctrinal principles while leaving practical applications to the laity, that's welcome news.