The Church's Noblest at Ground Zero 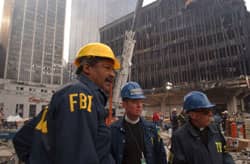 There are times when the church makes you feel proud. Priests' response to 9/11, ten years ago, is one of them.

This became evident as the U.S. Bishops' Office of Media Relations interviewed and sought reflections from a few persons for "The Catholic Church Remembers," a website memorial of video clips, photos and print that can be found can be found here.

Cardinal Edward Egan, retired archbishop of New York, was one of the first responders that fateful morning. He headed for Ground Zero when he heard of the attack. As he was on the way Mayor Rudolph Giuliani called and asked him to go instead to await the injured at St. Vincent's Hospital. Thus began the cardinal's critical service to a city in need.

The first person he met at St. Vincent's was a woman, burned from head to foot. The second was one of his priests, a fire department chaplain.

By rank, a cardinal is like a U.S. senator or a general, a big-time leader you don't expect to find on the front of any war. Cardinal Egan didn't see himself that way.

"I kept saying to myself, 'I'm not a fireman, a fire person, a firefighter,'" he recalled on video. "'I'm not a police officer. I'm not an emergency worker. I'm a priest and I'm going to do everything that a priest can do under these circumstances.'"

Afterwards, he worked at Ground Zero, a site so contaminated that officials told him to discard all his clothes when he returned home. He anointed bodies, listened to rescuers, and consoled both the disconsolate and their consolers. He celebrated funeral Masses at St. Patrick's Cathedral and led prayers when President George W. Bush arrived at Ground Zero, and at an ecumenical service he organized Yankee Stadium.

Other priests sprang into action, too. Msgr. Kevin Sullivan, head of Catholic Charities of the New York Archdiocese, saw that it was not just Wall Street people with significant finances who were affected. It was also those who live on the edge, such as the wait staff at Windows on the World, the restaurant atop one of the Twin Towers. Msgr. Sullivan contacted the unions and said Catholic Charities would pay the salaries for six months for restaurant workers there, who were suddenly out of work—enough time, he thought, for them to find another job.

Other priests made their way to the scene, most notably the fire department chaplain Franciscan Father Mychal Judge, the first officially recorded fatality of the attack. When rescuers found his body, firemen carried it from the rubble, not to a mortuary van but to the sanctuary of a nearby church.

Other clergy responded as priests too. The city established a site for those looking for missing family members, a place with counselors and social workers. The line went on for blocks and priests walked alongside it and helped people accept the inevitable—a loss of someone only to be found again in heaven. A veteran psychiatrist told Cardinal Egan that he was amazed when he interviewed families and saw how deeply they had been touched by their sidewalk conversations with priests.

The church knows the importance of chaplains and designates priests to help emergency workers such as police, firefighters, and Federal Bureau of Investigation agents. These public servants need one of their own in crises and at 9/11 their own priests responded.

9/11's own, however, also turned out to be not just official chaplains but also priests in other ministries, like Msgr. Anthony Sherman, a Brooklyn pastor who counseled strangers and led funeral Masses for the dead from his parish—some whose bodies were never found—and Jesuit Father James Martin, an editor at America magazine, who worked with rescuers in the aftermath, and so many other unnamed and unrecognized priests who offered the sacraments, encouragement and human consolation. They rose to the heights of their calling, in the depths of that tragedy.

Cardinal Egan calls Ground Zero, "Ground Hero." He speaks of a medical intern who stayed on duty though his father worked high in one of the Twin Towers, of a widow with babe in arms in the front pew of St.

Patrick's for her husband's funeral, of the police who demanded for five days that the cardinal wear a gas mask to protect him from the contaminated air at the site but didn't wear their own because the masks impaired visibility.