Cloisters in the Alleys

August 01, 2011 by Pat McNamara
"Like" the Patheos Catholic Page on Facebook to receive today's best commentary on Catholic issues. 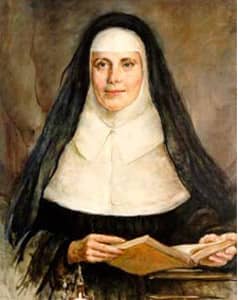 "God knows I would rather be cold and hungry than that His poor should suffer want."

In 1820's Dublin, Catherine McAuley, a wealthy heiress, opened a home for poor women and homeless girls on Baggot Street. It opened on September 24, the Feast of Our Lady of Mercy. Catherine gathered a group of like-minded laywomen to meet the day's pressing needs: poverty, sickness, and illiteracy. They formed the nucleus of a new religious community, the Sisters of Mercy, which formally began in 1831.

Most Irish convents at the time were contemplative. The Sisters of Mercy were unique in extending their work to society's "least": the poor and elderly, the uneducated and sick, the imprisoned. Besides the vows of poverty, chastity and obedience that all religious take, they take a fourth vow of service to "the poor, sick and ignorant." It was said that their cloister was "the alley of the poor."

"Mercy spirituality" flows from Catherine's love of Christ as mercy, whose love is manifested in works of mercy. For Catherine, mercy was "the principal path pointed out by Jesus Christ to those who are desirous of following Him." Her charism, Sister Kathleen Healy writes, "is expressed in prayer and service for the poor."

In Ireland, the sisters taught and cared for the disadvantaged. During a cholera epidemic, they tended the dying "while friends and neighbors fled in terror." During the Famine, they traveled into city alleys and rural huts with food and medicine. They consoled "the sad-hearted father, the weeping mother, the hungry child." For Catherine, there was no such thing as undeserving poor: "It is better to relieve one hundred imposters, if there be such, than to suffer one deserving person to be sent away empty."

In 1843, Mother Frances Xavier Warde brought six Sisters to America. Warde, who founded nearly one hundred American convents, was described as having "all the majesty of three Queen Victorias." They settled in Pittsburgh, where they initially faced prejudice. They opened a school, an orphanage, and the first of many hospitals. In 1848, during a typhoid fever epidemic, many Sisters died, but their witness killed local hostility.

From there they moved throughout the country, wherever they were invited. They served in the Civil War as nurses, through epidemics of every kind, through floods and earthquakes. Sister Kathleen Healy writes: "They traveled in every way available-from stagecoach to Conestoga wagon-establishing schools, homes, orphanages, hospitals, where none existed. Comfortable living did not exist for them."

What did they do? They taught school, nursed the sick, ran orphanages and hospitals, residences for women and the aged, vocational training schools, and nurseries. In 1850's San Francisco, they ministered to cholera victims. A local newspaper commented:

They did not stop to enquire whether the poor sufferers were Protestants or Catholics, Americans or foreigners, but with the noblest devotion applied themselves to their relief. One Sister might be seen bathing the limbs of the sufferer; another chafing the extremities; a third applying the remedies; while others with pitying faces were calming . . . the dying. The idea of danger never seems to have occurred to these exceptional women; self was lost sight of.

They ransomed slaves in the South when they could, and they worked with Native Americans in New England and elsewhere. One Sister wrote: "What matter if the flesh be white or black or brown? The dying Savior wore for all the thorny crown."

One historian notes that starting new foundations out West "were little in comparison with those of breaking a path in Puritan New England." Providence, Rhode Island, in the 1850's was a hotbed of anti-Catholicism, and mobs threatened to burn down a Mercy convent, but Irish immigrants prevented them from carrying out their plans. In time, Mercy schools became a standard feature of Rhode Island Catholicism.

In New Hampshire, they were the first Catholic nuns ever seen. Many Protestants believed that convents were prisons where young women were held against their will by lecherous clerics. On Saturdays, Sister Gonzaga O'Brien conducted convent tours for locals expecting dungeons, torture rooms and underground tunnels. (Some visitors, in hushed voices, promised to aid her escape.) They were among the State's first female teachers, social workers, nurses and hospital administrators.