August 02, 2011 by Greg Kandra
"Like" the Patheos Catholic Page on Facebook to receive today's best commentary on Catholic issues. 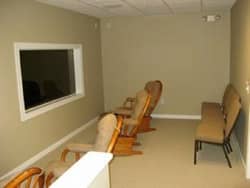 What's the single most damaging innovation to Catholic churches over the last 50 years?

It's not the removal of altar rails or the electric vigil candles, or the fancy felt banners that hang from the ceiling. Guess again.

At countless Catholic churches built in the '60s and '70s, glass-enclosed sanctuaries were constructed, usually in the rear of the church, where parents could take babies who began to wail during Mass. This probably seemed like a good idea at the time, I'm sure—most bad ideas do—and I suspect a lot of parents (and a few parishioners) were happy to take the criers out of earshot.

But is a crying baby really such a problem that it demands its own special room?

Clearly, some priests think so.

I once heard of a priest who would interrupt mass—smack in the middle of the Eucharistic Prayer—if a baby started to howl. He'd wait until the baby stopped, or the parents took it away, before continuing.

Another priest I know was pacing the center aisle during his homily when a baby started to sputter and then scream. He stopped in his tracks, then walked over to the pew, glared at the baby and said, with a wink, "Knock it off, kid. I work alone."

My pastor takes a different approach. If a baby starts to cry, and the mother begins to slide down the pew to walk it out the door, he'll stop mass to stop HER. "Don't leave!" he'll call out. "Please stay! Let the baby cry. He belongs here with the rest of us." More than a few times, a mother has stopped, mortified and embarrassed, unsure what to do, while the baby lets forth a full-throated "Waaaaaaaaah!" and the congregation chuckles and my pastor coaxes her to stay.

"We'll find a place for him in the choir," he'll say to appreciative chuckles from the congregation, "he sounds like a tenor." (Of course, not everyone approves. One mother who watched this happen expressed annoyance to me after Mass one Sunday. "How does he know what's wrong with a baby and making it cry?" she huffed. "Let the mother decide. If my baby's crying, there's a good reason.")

Be that as it may: when a baby cries, and a mother is encouraged to take it out of church, to a place apart, the parish is sending a distinct and unsettling message. It's indicating, not-too-subtly, that crying children don't belong. We might as well amend the creed: "One, holy, catholic and apostolic church - except for crying babies, of course."

I'm sure a lot of people would argue that the holy sacrifice of the Mass demands reverent devotion and full attention; it requires a sense of the sacred. Crying babies shatter that atmosphere. And I don't disagree.

But Mass also requires a sense of the human. The most perfect prayer on earth requires the participation of those who are imperfect. It assembles together broken, wounded people of all kinds, and in our brokenness, we pray. We sing. We adore. We praise.

In that spontaneous, unabashed wail we hear countless other cries of discomfort or fear or pain or sickness. That cry is our humanity, in the key of E. (Or "Eeeeeee!") There we hear the sound of Eden, and Egypt, of Bethlehem, and Golgotha. It might be argued that the most authentic language of the Church isn't Latin; it's the cry of one suffering soul.

A Protestant pastor once put it beautifully. "A church with a crying baby," he said, "is a church that is alive." When you hear babies in church, you're hearing life, and the promise of the next generation that will carry on the Good News. The faith will go on.

It seems to me that relegating babies to another part of the church—banishing them to a spiritual Time Out corner—is an effort to squelch that very idea. It tries to make the experience of going to Mass less distracting, more pristine. But to do that is to deny the beautiful, noisy, messy reality of life in the Church.

And that is more than unfortunate, and more than misguided.

In fact, it's a crying shame.