Devarim (or Deuteronomy) is a dark and difficult text, a text overwhelmed by battles to establish order and authority, a text where there is little mercy to be had. Kill the seven nations, even their children; do not worship their gods; worship only at this one place; listen to only this one court and if you do not you will be killed.

In the Shoftim portion, yet another capital crime is introduced—the crime Talmud and Mishnah will come to refer to as "zaken mamre," or the rebellious elder. The phrase "rebellious elder" appears, for the first time, in the Midrash, but it is nowhere to be found in the Torah's actual text.  In the text, it is a law regarding two litigants who appeal their case to the highest court located in the "place your God shall choose," universally understood to refer to Jerusalem, the place God chooses for the temple. Once the highest Court renders its verdict, the litigants must obey the Court's decision (Deut. 17:8):

And the man that will act willfully, not listen to the priest who stands there to sever God, or to the judge, that man shall die, and you shall destroy the evil from among Israel.
(Duet. 17:12)

After the temple is destroyed and the court in Jerusalem is abandoned, the early rabbis read this passage and saw nothing of their world within it. Forced to abandon temple Judaism, they begin the incredible task of creating a Judaism that walks off the Torah scroll and finds shelter in the Talmud's folio. For this new Judaism to work, the everyday litigant and the highest court in Jerusalem are replaced with rabbinic scholars and the study halls of Yavneh, the first city of rabbinic Judaism. The litigant who does not obey the court is transformed into the rebellious elder, who does not obey the rabbinic majority.

However, unlike the insubordinate litigant, the rebellious elder is not killed. In the Babylonian Talmud, his dissent is tolerated, assuming his argument is good. The Talmud limits the areas of law where the rebellious elder prohibition applies until practically every substantive area of law is ruled out, and even then, its application is further limited based on three procedural scenarios.

In the first scenario, the rebellious elder bases his ruling on the "tradition" or an argument that has authority because it is received from an authoritative source. If the majority based their ruling on tradition as well, the rebellious elder is sparred. Two arguments from tradition are permitted to coexist. In the second scenario, the rebellious elder's argument is based on his individual reasoning. If the majority argument is also based on individual reasoning, the elder is spared. Good and diligent people can have honest disagreements. The third scenario is the only one where the elder is convicted. Here, the elder argues from individual reasoning while the majority argues from tradition (Sanhedrian 88B). There is a limit to the pluralism of the Talmud—an inherited argument put forth by the majority cannot trump an invented minority opinion.  However, outside this limitation, a good argument is a good argument, whether argued by the majority or the minority.

The Talmudic construction of the rebellious elder is incongruous with the original intent in Devarim. While in Devarim, the law demands obedience at the cost of death; the Talmud's version expressly justifies intellectual dissent. The Talmud establishes an anti-authoritarian ontology under the guise of establishing authority.

Perhaps, it is in recognition of the reality that the rabbis of the Talmud had no means of enforcing their power. They had no army and no divinely ordained court. Within the law of the rebellious elder is the beginnings of a religion that exchanged the authority of the gallows, the whips, and the high court for the authority of discourse, persuasion, and the study hall. In the midst of transforming from a temple religion to a rabbinic one, Judaism shed the chilling single mindedness of Devarim. Devarim may the last book of the Torah, but it is not Judaism's last word.

Mayberry/ Mt. Airy N.C.--- and Where we are Now
Ben Witherington
2

We can't go on together with suspicious minds
Fred Clark
3 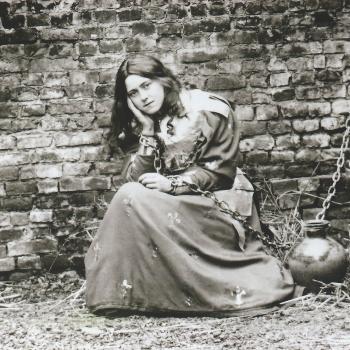 Anna Batler
Anna Batler is a writer and an attorney based out of Washington, D.C. She writes about faith, feminism, spirituality, and religious identity at Sotah.net. She also writes a weekly feminist Bible commentary at GatherTheJews.com.
Get Patheos Newsletters
Get the latest from Patheos by signing up for our newsletters. Try our 3 most popular, or select from our huge collection of unique and thought-provoking newsletters.
From time to time you will also receive Special Offers from our partners that help us make this content free for you. You can opt out of these offers at any time.
see our full list of newsletters