"God is Not a Christian": An Interview with R. Kirby Godsey 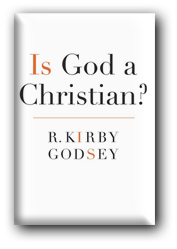 R. Kirby Godsey is an accomplished scholar with separate doctorates in philosophy and theology, a university president with an extraordinary record, and no stranger to controversy. When he was president of Mercer University, he published a book that ruffled feathers in Baptist circles and beyond.

His new book, Is God a Christian?, claims that "the stakes for mankind have grown too high for any of us to engage our faith as if our understanding of God represents the only way God's presence may be known in the world." It's already provoking heated debate. For our Book Club conversation, Godsey discussed the book with Timothy Dalrymple.

Your book is entitled, "Is God a Christian?" What do you mean by that?

I'm convinced that we cast our vision of God in terms that are too narrow and limited. Those of us who have grown up in the Christian tradition think it's rather obvious that God belongs to our tradition. We assume God is one of us. But it's just as apparent to people who grew up in different religious that God's Word and God's ways are not the exclusive property of the Christian tradition. There are people of genuine piety and profound religious conviction who have come to that piety through other avenues. At the very least, they deserve our respect and a listening ear.

Religious traditions are avenues by which human beings have sensed and expressed their sense of God's presence. But we should never impose the limitations of our own perspectives, our own limited understanding, upon God. God is not a Christian. God is not a Jew. God is not a Hindu. God is above all our perceptions and all our expressions of God.

This in no way diminishes my own Christian commitment. We should never assume that the validity of the Christian tradition is dependent on the invalidity of every other tradition. The light of God's presence in the world has come to me chiefly through Jesus Christ, but it's certainly plausible to me that others have experienced God's presence in the world outside that tradition. I have no standing to say that God has not spoken in different languages than the Christian language.

You wrote this book prior to the slaughter in Norway, where Anders Breivik cited the defense of Christendom as a justification for the murder of innocent men, women and children. Is this just another depressing confirmation of the urgency of creating communities of conversation across religious boundaries?

It is. There's a mountain of bad religion in the world. Every religious tradition, including our own, has its dark side. Religion goes awry. It's used for evil purposes. People kill and maim in the name of God, or Allah, or Yahweh. That's what prompted the writing of this book.

I don't think that all fundamentalists are bad people. But there's not a dime's worth of difference between Christian, Jewish, Muslim or Hindu fundamentalists. They're all cut from the same cloth. Fundamentalist exclusivity, where God is identified with the Christian order, and therefore everything that challenges that social order is a challenge to God and should be a challenge to all Christians and humanity, seems to lead to the kind of terrible human tragedy we witnessed in Norway.

All people, not just Christians, are created in the image of God. Christians will never be able to kill enough Muslims to make the world better or safer. Muslims will never be able to kill enough Christian infidels to make the world a good or safe place. We will begin to be a better world when we acknowledge that every person is a child of God, created in God's image. That means, at a minimum, that we need to learn to respect one another and connect with each other with a sense of civility.

Jesus does not say that you should "love one another" except when the other person is a Hindu. The expectation that we love, embrace, forgive, and act with grace, is unconditional. I hope the underlying message of the book I've written is a message of grace. We need to act with grace toward people with other faiths. And a part of acting with grace is trying to understand them, which begins by listening. In fact, our own confessions of faith will be far more persuasive if we have the courage to listen first and understand the light by which others live.

Many Christians grant that "there is truth" in other religious traditions, and Christians can learn and be inspired by people of other faiths. Yet they feel that the definitive revelation is in the revealed scriptures and in the Word made flesh, Jesus Christ. This implies that other religious traditions are missing some very important elements. What would you say to that view?