August 25, 2011 by Lee C. Camp
"Like" the Patheos Evangelical Page on Facebook to receive today's best commentary on Evangelical issues. 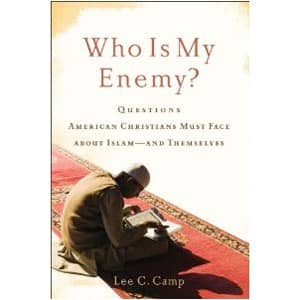 When it comes to questions of war and peace, is American Christianity more like Muhammad or Jesus?

Since 9/11, such a question has seemed outrageous to many Americans. But perhaps the offense is grounded in some unhelpful assumptions.

Here in the Bible Belt, many argue that Islam is inherently war-mongering and oppressive, and that it is waging a "holy war" against anyone that refuses to embrace Muhammad.  Others around the country assert that all religions are inherently concerned with the same ethical core, pursuing "love" and "peace."

Both these stereotypes are deeply problematic, and their assertions ironic. Consider the second one first: the assertion that "all religions are basically saying the same thing." It is clear that the founding narratives, what we might call the "story logic" of Christianity and Islam, are fundamentally different when it comes to the employment of violence and warfare.

The Jesus story entails a Savior responding to the injustice and violence of the world through suffering love: do not return evil for evil; love your enemies, and do good to those who do evil to you.

The early church took this at face value. Centuries later, Gandhi would claim, "The only people on earth who do not see Christ and His teachings as non-violent are Christians," but this was certainly not true of the early church. In fact, as the Yale historian Roland Bainton has summarized, "All of the outstanding writers of the East and the West repudiated participation in warfare for Christians." Moreover, Bainton notes, this was a novel development in human history: "prior to the advent of Christianity there is no record of anyone suffering death for a refusal of military service."

The Muhammad story begins with a similar stance: when suffering in Mecca, Muhammad counsels the early Muslims not to retaliate, but to suffer patiently. As is commonly known, Muhammad and the early Muslims leave Mecca, emigrating to Medina where Muhammad takes a role of leadership, and in this position of power, Muhammad permits retaliation and war-making. Moreover, retaliation became seen as that which would check and limit oppression. Justice, taught Muhammad, requires the brave employment of measured force.

So the very basic narrative of the stories differs significantly: in the Jesus story, doing good to those who persecute you is consistently taught and practiced, while in the Muhammad story, retaliation becomes an accepted practice.

This difference is heightened by the way in which the two narratives speak of vindication, of victory: the New Testament claims that Jesus was vindicated through resurrection, on the other side of a humiliating defeat in crucifixion. That a Messiah, an anointed one of God, should suffer such humiliation is what the apostle Paul said was "foolishness to the Greeks and a stumbling block to the Jews." But the resurrection was what we might call the "stamp of approval" by God the Father: this enemy-loving Jesus was indeed the anointed one, the Son who had obeyed God's will. This "story-logic" might be summarized as cross-vindicated-by-resurrection.

The Qur'an, on the other hand, assumes that the faithfulness of Muhammad and the Muslims was evidenced in their military victories, especially when small Muslim minorities overcame military odds, defeating larger forces. This "story-logic" might be summarized as martial-power-vindicated-in-military-victory. Given that justice should triumph over persecution, given that God is on the side of the right against the purveyors of wrong, this logic assumes that military endeavor, undertaken by those who are doing God's will, would and should win. In continuity with this logic, the Qur'an denies that Jesus, whom Muslims honor as a true prophet of God, was crucified.

These, then, are two very different stories. Clearly, on questions of war and peacemaking, the New Testament and the Qur'an go different directions, with different ethical implications.

But this is clearly not the end of the story, nor all that needs be said. The mainstream of the Christian tradition did not continue to reject war-making. Along with the alliance of Christianity and the Roman empire in the fourth century, the Christian "Just War tradition" (JWT) emerged. This tradition employs earlier Greek and Roman notions, and argues that war is always lamentable, but sometimes the common good requires followers of Jesus to engage in war-making. Even then, war should be practiced only for the goal of justice and cessation of violence, within certain limits carefully observed. The JWT became the mainstream conviction of the Christian tradition from the fourth century until today.