August 25, 2011 by Douglas Groothuis
"Like" the Patheos Evangelical Page on Facebook to receive today's best commentary on Evangelical issues. 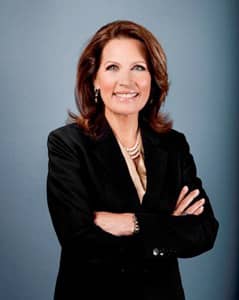 Attacks on presidential hopefuls will increase in volume, frequency, and audacity as the primary season draws near. Time is short, the stakes are high, and the pundits will pounce on their prey. One recent barrage against Congresswoman Michele Bachmann not only impugns her integrity as a political leader, but also questions something fundamentally and luminously American: the right of religious individuals to participate according to their deepest principles at every level of political life.

There is a buzz in the political beehive about the dark dangers of Bachmann's association with "dominionism"—a fundamentalist movement heaven-bent on imposing a hellish theocracy on America. In the August 15 issue of The New Yorker, Ryan Lizza asserts that Bachmann has been ideologically shaped by "exotic" thinkers of the dominionist stripe who pose a threat to our secular political institutions. The piece—and much of the subsequent media reaction—is a calamity of confusion, conflation, and obfuscation.

Lizza notes that Bachmann was influenced by the writings of Francis A. Schaeffer (1912-84), an evangelical minister, theologian, and philosopher. Schaeffer, along with the contemporary writer Nancy Pearcey and others, are "dominionists." That is, they believe that "Christians alone are Biblically mandated to occupy secular institutions until Christ returns." Worse yet, Schaeffer, in A Christian Manifesto (1981), supposedly "argued for the violent overthrow of the government if Roe vs. Wade isn't reversed." Lizza also writes of the influence of the prolific author Rousas John Rushdoony (1916-2001), who advocated "a pure Christian theocracy in which Old Testament law...would be instituted." Bachman is allegedly thick as thieves with all these "exotic" subversives—and should be exposed as such.

Having read reams of books from all these authors (and every book by Schaeffer) over the last thirty-five years, as well as having taught many of these books at the graduate level, I assign Mr. Lizza the grade of "F." Consider four reasons.

First, Rushdoony argued for a position he called reconstructionism (not theocracy), which would have made biblical law the civil law of the land. However, neither Rushdoony nor his followers desired to impose this system through violence or illegal activity, but rather see it come to fruition through a long-term change of minds and institutions.

Second, Rushdoony's devotees make up but an infinitesimal fraction of Christian conservatives. The vast majority of those who have been influenced by certain aspects of Rushdoony's writings emphatically reject his understanding of biblical law, as do I.

Third, the key Christian influences on Bachman are not Rushdoony and his followers, but Francis Schaeffer and Nancy Pearcey. Schaeffer referred to Rushdoony's views on mandating biblical law as "insanity," and never sanctioned any form of theocracy. (The name "Rushdoony" does not even appear in the index of Schaeffer's five-volume collected works.) Schaeffer explicitly condemned theocracy in A Christian Manifesto (p. 120-1). Nor did he call for the violent overthrow of the government if Roe V. Wade were not overturned. Schaeffer rather explained various ways of resisting tyranny according to a Christian worldview and in light of church history. He saw "civil disobedience" (his phrase) as a last resort and did not stipulate any specific conditions under which it would be advisable in America. In fact, Schaeffer worried (on p. 126) that speaking of civil disobedience is "frightening because there are so many kooky people around." Further, "anarchy is never appropriate."

Fourth, Nancy Pearcey has extended and further applied Schaeffer's thought. Like him, she does not endorse theocracy, but rather the participation by Christians as good citizens in all areas of life.

Those who tar and feather "dominionists" are confusing their readers by conflating Rushdoony's reconstructionism with the thinking of Schaeffer and Pearcey. Worse yet, Lizza and company may believe that any Christian influence in politics is dangerous and un-American. If so, they should reread and ponder the First Amendment's guarantee of religious freedom and the freedom of speech. Christians are free to be active members in the public square—along with those of other religions or none. Erecting "dominionist" straw men does nothing to advance this noble cause of freedom.