A Plane Crash, Sharks, and the Presence of God

August 07, 2011 by Tony Rossi
"Like" the Patheos Catholic Page on Facebook to receive today's best commentary on Catholic issues. 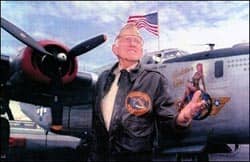 All of us have gone through tough times in life, but Louie Zamperini's were unique.

While a member of the Army Air Corps during World War II, the B-24 Louie was on crashed into the Pacific, leaving only himself and two companions -- Russell Allen "Phil" Phillips and Francis "Mac" McNamara -- alive. Lost in the middle of the ocean on a small life raft, the three men endured hunger, thirst, delirium, fear, being shot at by Japanese warplanes, and hungry sharks that were sometimes bold enough to attack. No human beings had ever survived beyond thirty-four days in a similar situation and, in fact, Mac passed away on the 33rd day. But Louie and Phil held on for forty-seven days when they were finally rescued by a nearby ship. A Japanese ship.

And that's when Louie Zamperini's life really got hard.

Louie's life story is told in a best-selling book we were pleased to honor with a Christopher Award this year. Written by Seabiscuitauthor Laura Hillenbrand, it's called Unbroken: A World War Two Story of Survival, Resilience, and Redemption. The book embodies what the Christopher Award is about because it focuses on someone who endures incredibly horrific times, yet eventually makes the choice to not be overcome by the darkness but instead be a light to others. Louie Zamperini was certainly entitled to feel bitter in light of his experiences on the life raft, and then two years of torture as a Japanese prisoner-of-war. Though I won't give away the specifics of what happens, I will point out that the words "survival" and "redemption" are in the book's subtitle.

One interesting element, though, is how God introduces Himself into the story in subtle ways. Though Louie was a good man who nominally believed in God, he had never been religious so the divine wasn't a major factor in his life. But in times of distress, we often express a natural instinct for God.

For instance, when Mac died on the raft, Louie wanted to offer some religious words during the eulogy. The best he could do was recall some Bible quotes he'd heard in movies. Then he offered the most sincere prayer of his life. Hillenbrand writes, "(Louie) prayed for himself and Phil, vowing that if God would save them, he would serve heaven forever."

Soon after, Louie experienced a moment of grace. Hillenbrand describes the scene on the raft:

One morning, they woke to a strange stillness. The rise and fall of the raft had ceased, and it sat virtually motionless . . . It was an experience of transcendence. Phil watched the sky, whispering that it looked like a pearl. The water looked so solid that it seemed they could walk across it . . . For a while they spoke, sharing their wonder. Then they fell into reverent silence. . . . Such beauty, (Louie) thought, was too perfect to have come about by mere chance. That day in the Pacific was, to him, a gift crafted deliberately, compassionately, for him and Phil.

With every worldly comfort taken away from him, Louie Zamperini experienced a hint of God's presence and design in his surroundings that he had never noticed before.

His life wasn't immediately changed, but spiritual seeds were planted that would blossom many years later.

If you're looking for a great read, I can't recommend Unbroken highly enough. It's not only a true story of heart-pounding adventure, but also one that will touch your heart and soul in profound ways.