Ramadan Is Meant to Be Shared 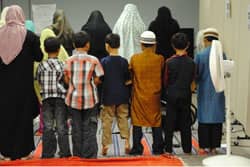 My Facebook feed is full of Ramadan well wishes from around the country, and my inbox is flooded with Ramadan messages and prayers from friends and family. As one friend so aptly said in her status update, "It's the most wonderful time of the year!" This is the month most Muslims look forward to the whole year. It's a time when we come together as one Ummah (community) and strive together in the same physical practice of fasting, even as our inner journeys are unique to our own individual Ramadan goals.

Ramadan is the ninth month of the Islamic calendar, a month when Muslims abstain from food and drink from sun up to sundown and focus on elevating their worship and prayer and spiritual connection to God. (This Ramadan FAQ will help answer all your questions about this holy month.)

As a journalist covering Islam in America for more than a decade, I've been telling the story of Ramadan from all angles. But what I find unique this year is how Muslims in America are grasping onto Ramadan with such pride and love, eager to wear their fasts as a badge of honor, explain what they are doing and why they are doing it to anyone who will listen, and using all platforms to seek that connection of community with each other—whether via social networking or through communal iftaars and evening tarawih prayers. We've always known how special and important Ramadan is, how it is a month for us to become the best we can be, and we want to share this with everyone—especially in light of the difficulties we are facing.

It's been a tumultuous past 10 years for Muslims around the world and Muslims in America. The tragedy of 9/11 created such a line of demarcation in our stories and lives as Muslims. As Wajahat Ali wrote in his article on post-Osama life for Muslim Americans, "There is a permanent fork in the timeline of the Muslim American narrative: Pre-9/11 and Post -9/11."

In 2010 alone, Muslim Americans faced a frenzy of suspicion, mistrust, and hate over situations like Park51 in New York City, or in Murfreesboro, Tennessee, where Muslim American citizens are battling a community who doesn't want them to construct a mosque, or in Florida, where Pastor Terry Jones engaged in a campaign to burn the Qur'an.

We hoped that something would give in 2011, and indeed the year started off with the death of Osama bin Laden, the self-proclaimed mastermind behind the attacks of 9/11. But it seems like no matter how much Muslims try to be a part of the American fabric, no matter how many times we condemn terror attacks or violent thinking of so-called Muslims with the intent to harm humanity, the suspicion, the mistrust, and the hatred is not subsiding. Many states have misguided and unnecessary anti-Sharia laws on the docket. Republican presidential candidate Herman Cain deemed the need for a loyalty test for Muslim Americans.

And, perhaps saddest of all, a terrorist in Norway, a so-called Christian, latched on to the vitriolic anti-Islamic rhetoric of several prominent American bloggers and pundits and killed more than 80 Norwegians. More than anything, this terrorist attack showed that hate inspires hate. The 1,500-page manifesto of Anders Breivik reveals how the hate speech of several American anti-Islam activists helped encourage him to commit acts of terror in his home country.

Was it vindication for Muslim Americans to know the rhetoric and anti-Islamic vitriol that we live with helped to cause such a tragedy? No. Vindication is not what Muslim Americans are seeking. We are seeking to live our lives and practice our faiths in a respected and accepted manner in the United States. We are seeking the right to live our lives as Americans and Muslims. And Ramadan is our time—our time to embrace who we are unabashedly, to practice our faith as a whole community, to seek coolness and peace in fasting for the sake of Allah, to show by example what it truly means to be Muslim.

We want everyone to know what we're doing, to understand why Ramadan is so special to us, to show how important it is for us to partake in the physical and spiritual rituals of this holy month. When I see the outpouring of Ramadan Mubaraks in the virtual world as well as in my daily life, when I see the eagerness Muslims have in anticipation of this month, I feel like I am riding a tidal wave of joy and relief, hope and seeking that pours into our mosques, homes, and hearts.