August 21, 2011 by Max Lindenman
"Like" the Patheos Catholic Page on Facebook to receive today's best commentary on Catholic issues. 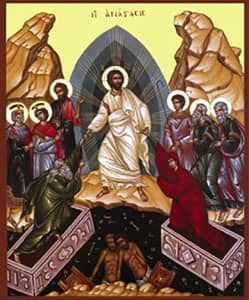 Christian charity comes in many forms, among them helping a grown man tie a necktie.

I learned this after emerging from the baptismal font and rushing to the parish library, where that year's crop of male candidates were to change out of the smocks that made us look like mental patients and into the suits that made us look like funeral directors. Slipping my tie around my neck, I realized I'd forgotten how to tie it—strange, because I wear them regularly enough. Like the crash of a coconut against the cranium, immersion in holy water had given me amnesia.

I explained this quickly to my sponsor. Like the Eagle Scout he'd once been, he tackled the problem, wordlessly seizing both ends of the tie and setting to work. Also like a former Eagle Scout, he ended up tying a knot more fit for the America's Cup or frontier justice than men's fashion as it is generally understood. But the awful sight jogged my memory, enabling me to re-tie it to my satisfaction, so the good deed was done.

I'm not sure it's proper to speak of unsung heroes in Catholic ministries, since good form demands that everyone deflect credit when it's offered. But some forms of service seem to me a little more obscure than others. Catechesis, music, and the liturgy are things whose quality everyone considers himself qualified to judge; standouts in these fields can expect a certain amount of recognition. Relief work has a distinctly Spartan glamour. Sacrifices and rewards of spending a few hours each week with an RCIA candidate are smaller and subtler. Reading the ledger is hard—until you've been on one end of the arrangement or the other.

Me, I've been on both. Both times, my opposite number was a complete stranger, assigned me by Sister Lucia, who ran our parish's RCIA program. When it came to judging our compatibility, she had nothing to go on but her own intuition. For someone like me—equal parts introvert, misanthrope, and snob—each partnership was as terrifying a prospect as an arranged marriage. The fact that both turned out to be mind-broadening, eye-opening experiences points to the strange magic of the system.

I'll call my sponsor Phillip. A Ph.D. candidate at the very university I'd graduated from, he looked exactly like any teaching assistant in the pure sciences: slumped, with downcast eyes that wore a permanent look of resignation. He spoke slowly and with great circumspection, sighing often, as though addressing an especially volatile thesis committee chair. Accustomed to the roistering blades of the home finance industry, I took him for a milksop. I was wrong.

Phillip's father is a well-known theologian. During our classes, Phillip proved that he possessed the chops to enter the family business, had his interests run in that direction. Whenever a presenter got carried away with his or her enthusiasms—when the social justice lecture began veering toward Boff-land, or when the sex talk assumed the tone of Reefer Madness—Phillip would nudge the class back on course. Much later, in his steely determination to assert himself, bubble-wrapped in tact, jargon, or both, I came to recognize the style of certain bishops' pastoral letters. Those moments make up some of the best lessons in practical ecclesiology I've received to date.

Later, I found a way to return the favor. It became clear that the younger parishioners, many of whom were working toward their own advanced degrees, had appointed Phillip the alpha of their pack. Broadly speaking, guys wanted to play John to his Jesus; women wanted to play Clare to his Francis. Rather than shrug off his mantle or flaunt it, Phillip wore it casually, like a prince to the manner born. From the respect of his peers, he derived a pleasure that struck me as both healthy and well earned.

It happened that during Mass Phillip's friends sat together en banc at one end of the chapel. Custom encouraged sponsors and candidates to sit together. In some roundabout way, Phillip gave me to understand that he preferred to join his crew, but that some caste rule would prevent me from following. Just as obliquely, I hastened and blessed his departure. For me, it was a moral awakening. If being a Christian, living the Golden Rule, could as easily mean making small concessions to another's comfort as, say, dying at the hands of Brazilian loggers, it seemed for the first time like an attainable goal.

A year later, when I was tapped to sponsor a candidate of my own, I felt flummoxed. My candidate, a hearty, athletic, all-American college senior whom I'll call Chip, could have been any of the Beach Boys except Brian Wilson. As far as I could tell, he needed no help on his faith journey; for him, it was as smooth and as much fun as a trip down a half-pipe. Since he had no immediate plans to marry a Catholic, and didn't seem overly troubled about the meaning of life, I couldn't imagine what he was doing there.