Reformed and Revived: The Friday Five with Collin Hansen

Today I'm pleased to chat with Collin Hansen, the editorial director of The Gospel Coalition. Prior to his work with TGC, Collin was a journalist with Christianity Today. A graduate of Northwestern University and Trinity Evangelical Divinity School, he authored Young, Restless, and Reformed and recently co-authored a terrific history of revival, A God-Sized Vision. (See my review.) Collin graciously answered my questions about the new gospel-centered movement, revival, and church history:

In your book, Young, Restless, and Reformed, and in your work with The Gospel Coalition, you've chronicled the growing interest in theology and gospel-saturated preaching across the country. How do you explain this interest?

At the risk of inciting accusations of arrogance, this is a work of God. This not the full extent of God's work in North America or around the world—thankfully—but we can all be grateful that so many have taken an unexpected interest in mining the depths of biblical theology with an aim to understand and proclaim the gospel of Jesus Christ. Contrary to what some have recently argued, we're seeing God raise up a generation of Christians who want to learn from the old ways, who look up to their forefathers in the faith, both contemporary and historical. They might not agree in every way with these mentors, and they might speak in different cadences and clothing. But I'm grateful that this movement doesn't see itself as the next great hope for the world and evangelicalism. They recognize the debt we owe to others who came before and chiefly the Savior who delivers us from our sin.

How is a movement like this—a movement among God's people to return to the Word as well as a renewed emphasis on mission and church planting—different from revival? Or is it a form of revival?

I don't know that we could stand in the middle of this movement and declare it definitively as a revival from God. But we certainly ought to observe the resonance you have identified with revival. We have so much to thank God for, including his evident plan to raise up believers who will proclaim his gospel to the nations, starting in our backyards, through pioneer missions and church planting. I recently moved to another part of the United States not known for its evangelical witness. Some 20 years ago we would have struggled to find any church in our area that believed the gospel. By God's grace we've already visited several young churches where believers boldly affirm their allegiance to God's Word. As he does in revival, God is breathing new life into a church that has been gasping for air.

Would you consider response to the evangelistic crusades of men like D.L. Moody and Billy Graham as revival?

No, I would not. Now, they might be employed by God as a component of revival, as I believe was the case in the early years of Graham's ministry as the Lord raised up the post-war evangelical movement. But in and of themselves they should be properly classified as evangelistic campaigns—on the whole a good thing but far from the unplanned, uncontrollable work of the Holy Spirit in revival to testify to Jesus Christ.

One of the great features of A God-Sized Vision is that you discuss the theological basis for revival as well as the excesses of some revival movements. Do you think most Christians have a misunderstanding of what revival is?

Yes, and that's a primary reason we wrote the book. We believe misunderstanding over revival has led many to disparage and even neglect the real thing. Too many associate revival with a church's guilt-laden, manipulative summer camp event. This has been the case for at least half a century in America. We hope many people will be helped by our book as it explores the basis for revival in the Old and New Testaments, along with church history through the 20th century.

You encourage pastors and church leaders to study the revival movements in history. Why is this so important?

Otherwise our perspective will be limited to our own experience, and few if any of us have seen a revival in person. God gives us history as a testimony to his never-changing character. He has done mighty works of revival in the past, and he can do it again today. Is it too much to ask that we would pray for it? But if readers are anything like me, they need encouragement. They need to be inspired. That's what these stories have done for me: given me a renewed commitment to trusting God to do mightier things than I expect or imagine. 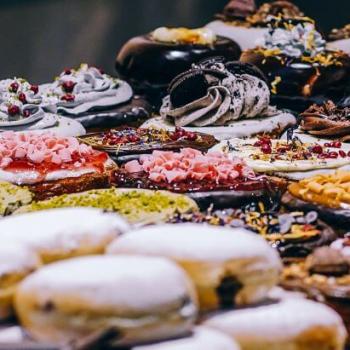 About Daniel Darling
Daniel Darling is the Senior Pastor of Gages Lake Bible Church in the northwest suburbs of Chicago and the author of Crash Course and iFaith. His columns appear at Crosswalk.com. Follow him through Facebook, Twitter, or his personal website.
Get Patheos Newsletters
Get the latest from Patheos by signing up for our newsletters. Try our 3 most popular, or select from our huge collection of unique and thought-provoking newsletters.
From time to time you will also receive Special Offers from our partners that help us make this content free for you. You can opt out of these offers at any time.
see our full list of newsletters