August 15, 2011 by Tim Muldoon
"Like" the Patheos Catholic Page on Facebook to receive today's best commentary on Catholic issues. 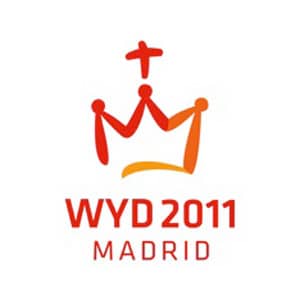 Are we not perhaps seeing once again, in the light of current history, that no positive world order can prosper where souls are overgrown? —Benedict XVI, Spe Salvi, 15

Young people from around the world are descending upon Madrid this week to celebrate World Youth Day (WYD). I am not so young, but I have the opportunity to accompany students from Boston College, so I too am going as a pilgrim. I hope to comment further on my Patheos expert site during the week, so feel free to check back there.

Why am I going? Why are some half a million young people signing up to go? Because we are drawn by hope.

As I write this, there is a food and water crisis in the horn of Africa that is the worst in 60 years. There are conflicts in Syria, Afghanistan, and Libya; there have been riots in Western China and in London; there was a terrible shooting in Norway. Debt and recession haunt industrialized nations, while some developing nations teeter on the brink of economic collapse. Today, as in every age, there is great reason for despair, and there are many whose lust for power leads them to fool others into believing they have the cure for it. Says the author of Ecclesiastes, "I considered all the oppressions that take place under the sun: the tears of the victims with none to comfort them! From the hand of their oppressors comes violence, and there is none to comfort them!" (4:1).

The young people that I teach know their history. They know of the abortive modern attempts to save the world through political and economic machinations. They know their Marx, Hitler, Stalin, Mussolini, Mao, Pol Pot. They have learned about apartheid and civil rights, about Baby Doc Duvalier and Robert Mugabe, about Gaddhafi and Kim Jong-Il. They have read stories and essays by Native Americans and other indigenous peoples of Asia, Australia, and Africa. They have internalized the stories about women's changing roles over the course of the twentieth century. Yet they also know that Facebook helped overthrow Hosni Mubarak and helped steer the London riots, and that Al-Qaeda is becoming a virtual state waging digital jihad. History, even the kind that we write every day, looks a lot like power games unless there is a source for hope that supersedes our small and temporary answers to the question of how to live. Progress is great, but with Theodore Adorno we may observe that progress can sometimes look like moving from the sling to the atom bomb.

In making a pilgrimage to WYD, then, we seek a deeper and a greater hope, one that does not fall prey to the silly trading of power from one generation to the next. We seek the faces of others who, like us, reach out beyond the limitations of human attempts to create utopias, toward a God whose message of hope is inscribed within our hearts, and whose offer of meaning even amidst suffering is the only satisfaction of our deepest desires. Our guide in this pilgrimage, Pope Benedict XVI, has written:

His love alone gives us the possibility of soberly persevering day by day, without ceasing to be spurred on by hope, in a world which by its very nature is imperfect. His love is at the same time our guarantee of the existence of what we only vaguely sense and which nevertheless, in our deepest self, we await: a life that is "truly" life. (Spe Salvi, 31)

A life that is truly life: that is what draws us. And this is no selfish desire. Today my students are spread out all over the Iberian peninsula, serving in various ways: cleaning beaches; working with the mentally and physically handicapped; living with those experiencing urban poverty; being with children and the elderly. They do not seek an escape from the harsh realities of life. They wish instead for a transformed vision of life that enables them to enter these harsh realities with joy. For they understand that such a transformed vision is, to use an image of Saint Augustine, like cleaning out a jar filled with vinegar in order that God might fill it with honey.

The world can sometimes feel like a place that makes our hearts full of vinegar. Our pilgrimage is itself an act of hope: there are any number of other ways to spend our time and money. Yet in coming together in God's presence, we are acting in faith that he can transform our hearts and renew us in love, and thereby renew the face of the earth.