Strangers on a Chain

August 25, 2011 by Marcia Morrissey
"Like" the Patheos Catholic Page on Facebook to receive today's best commentary on Catholic issues. 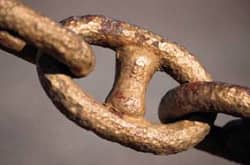 This past Sunday we attended a "thank you celebration" for a brave nine year-old who has been through a very difficult battle in his young life. Our church and prayer chain have been praying for A.J. for a long time, and now his parents wanted to thank all those who had come together to support their son. When one is on a prayer chain, the needs can sometimes seem daunting, so it was uplifting and encouraging to rejoice with this family over their many answered prayers. I asked if I could tell their story, because it is a tale of hope, and the prayerful and practical kindnesses of a community.

A.J. was diagnosed with Noonan syndrome (NS) in 2006, after his parents spent 2 years searching for the cause of his horrible joint pain and poor muscle tone. Finally a geneticist made the diagnosis that explained his symptoms. He takes daily medication to control the pain.

In December 2008, they took A.J. to the doctor because of excessive bruising and a rash all over his body. When tests showed his blood count extremely low, he was rushed to Children's Hospital, where he was scheduled for a bone marrow biopsy the following morning. He required a platelet transfusion, and it was concluded that A.J. had severe aplastic anemia.

When 4 months of treatment brought no change, the next option—a bone marrow transplant—had to be considered. No family members were suitable matches, but thankfully a donor match was found through the national registry. A perfect match.

To prepare for the transplant, A.J. needed every cell in his marrow to be killed off, with chemo and total body irradiation. It was very difficult on him. This was extremely hard for his family to watch, but they knew this was the only way to try to save his life.

His immune system destroyed, A.J. had to be mostly isolated from others, but overall things were proceeding fairly well until November of 2009 when he began to have seizures. The doctors discovered a tumor in his frontal lobe—PTLD, a rare complication of the transplant. It was treated with drugs, and based on the scans, was shrinking.

Once again, A.J. and his parents thought things were going in the right direction until the seizures returned in March. Yes, PTLD, again. But this time doctors found a much larger tumor; lymphoma.

This was devastating news.

Drilling a small hole into A.J.'s skull, they put in a port to administer chemo directly to the tumor. After chemo treatment, a repeat MRI and PET scans showed success and no signs of new growth or cancer activity

A.J.'s dad is a firefighter at the local firehouse where this celebration was held, and while the family was enduring this ordeal, his fellow firefighters mobilized a "rescue squad" to take over many household duties—cleaning house, yard work, and even deck-painting—so the family's focus could remain on A.J.

The night before his first surgery, two firefighters showed up at 11:00 pm in the hospital to sit with A.J.'s family—simply to be there, present with them. This show of friendship and support meant so much. Other co-workers donated their vacation days to help their friend spend time with his son.

The generosity extended beyond the firehouse, though. As medical expenses mounted, the neighborhood organized a community yard sale to raise funds to help with the mounting medical expenses, and people remembered one little boy who was especially happy to be able to deliver the money his family had earned.

It has been a very long, difficult road for A.J. and his parents, but things are going much better now. A recent bone marrow biopsy and MRI indicates great success; his doctors are declaring him cancer free.

"A.J. has put on some weight, grown several inches, and is looking the best he has looked in 2 years," I was told. Their whole family was able to spend the 4th of July together at their cabin, and his parents marveled to see him able to have fun again, doing cannonballs off the pontoon and just being a kid. He was able to return to school, and has been keeping up with his classmates. He still gets tired if he runs around too much, but overall, there has been progress this past year.

Although his grandmother and I are on the same prayer chain, this firehouse gathering was the first time Ed and I met A.J. and his parents. While it was great to finally meet in person, in truth it felt like we were meeting old friends.

There is intimacy in prayer, and we had been praying a long time.

I know this event was intended to show gratitude to others for their support, but honestly, we were the ones who felt like saying "thank you," because it was so personally encouraging to be the smallest part of this story of sharing.

It was a privilege to share in A.J.'s victory celebration.