"Teen Wolf": Why This MTV Hit Is Worth Watching

Here's a shock: MTV is actually capable of producing a television show that is not obsessed with sex, drugs, pregnant teens, and the bad behavior of twenty-somethings living in New Jersey. While recent MTV productions such as "Skins" and "The Hard Times of RJ Berger" failed to find a substantial audience even among younger viewers, their latest offering titled "Teen Wolf" is a bona fide hit and is based (primarily in name only) on the 1980s movie starring Michael J. Fox.

The story focuses on ordinary teen Scott McCall (Tyler Posey) who discovers, after being bitten by a wolf, that he now runs the risk of sprouting claws, pointy ears, fangs, and fur any time he gets angry or excited. In short, he's a werewolf and the only person who knows is his best buddy Stiles (played by Dylan O'Brien, who gives by far the best performance of the younger actors and offers the comic relief that keeps the story from being simply another knock-off of the Twilight series). Of course, dealing with life as a werewolf isn't enough drama all by itself, so the plot offers up other intriguing complications for our anti-hero Scott: his girlfriend's family members just happen to be werewolf hunters, Stile's dad is the town sheriff charged with hunting down the creature (another werewolf whose identity is still not clear) that has been killing the locals, and the captain of Scott's lacrosse team hates his guts and wants to expose his secret. Throw into the mixture the themes of friendship, young love, high school drama, werewolf fighting, and sexual tension and you have the makings for a fairly decent teen supernatural drama.

It's not hard to see why this series is playing well to younger MTV viewers. U.S. culture right now is enjoying a preoccupation with books, movies, and TV shows exploring the lives of a host of supernatural teen characters from werewolves, to vampires, to wizards with telltale scars. Even as some Christian commentators knock this brand of entertainment for immersing teens in the world of the occult, I can't help but think that the attraction is something much simpler and more innocent. Adolescence is a time of coming into one's identity, of adjusting to a changing body, and experiencing wide swings in emotion. Should it come as a surprise then that youth can relate to a teen wolf whose body at times is out of control, whose every sense suddenly seems heightened, and who is desperately trying to fit even as he knows he's "different"?

Though it's no classic, what "Teen Wolf" has going for it is slick production values, solid scripts, and fairly good acting. The relationship between Scott and Stiles is true friendship as Stiles sticks by Scott's side even when doing so threatens his life. The romance between Scott and girlfriend Allison is handled with uncharacteristic discretion, given this is MTV. Unlike many teen programs, the parents are not played off as idiots or enemies. They generally care about their kids and are allowed to be human—albeit some are humans who just happen to chase werewolves for a living. All in all, the show has proved to be a ratings winner and has already been picked for a second season.

Those of us who work with youth in the Church are often quick to condemn whatever pop culture serves up for teen viewing. We want to be on the front lines of telling youth "Don't watch this!" or "Don't listen to that!" I think we'd be far better off asking ourselves, "Why are young people drawn to this? What about it connects with their hopes, their fears, and their experiences of adolescence?" Before we dismiss programs like "Teen Wolf," we might just want to take time to see what our teens see. Doing so might help us to understand them a little better and help the Church continue to speak a language that connects authentically with the world in which our teens live. 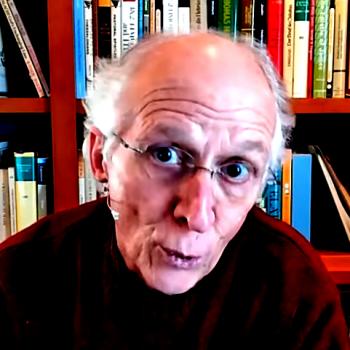 Heresy, Insanity, and The Destruction of the Faith of Jesus
C. Don Jones
4

DO YOU REMEMBER: A Buddhist Reflection by Robert Aitken Roshi
James Ford