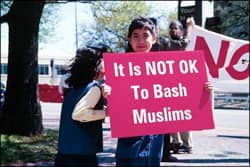 While post-9/11 resulted in necessary Western government responses to counter international and domestic terrorism, this tragic event has been widely exploited by far-right neocons, hardline Christian Zionist Right, and xenophobic forces. Islam and mainstream Muslims have been brush-stroked with "terrorism," equated with the actions of a fraction of violent extremists. Major polls by Gallup, PEW, and others reported the extent to which many Americans and Europeans had and have a problem not only with terrorists but also with Islam and all Muslims.

Islamophobia grew exponentially, as witnessed in America's 2008 presidential and 2010 congressional elections, Park 51 and post-Park 51 anti-mosque and so-called anti-Shariah campaigns, as well as increased hate speech and violence. The massacre in Norway is a tragic signal of this metastasizing social cancer. Anders Behring Breivik's 1500-page manifesto confirmed the influence of the hate speech spread by American anti-Muslim (Islamophobic) leaders, organizations, and websites.

It is truly time for a new narrative, one that is informed by facts and that is data-driven, to replace the shrill voices of militant Muslim bashers and opportunistic politicians chasing funds and votes. Key findings from the recently released Abu Dhabi Gallup Report, Muslim Americans: Faith, Freedom, and the Future, offer data that provide a good starting point—a very different picture of Muslims in America today.

Far from the image of a fifth column of foreign, terrorist sympathizers and shariah-imposing boogeymen, data indicates that Muslim Americans are actually among the most integrated, optimistic, thriving, and loyal citizens of this country. Astonishingly, despite the hate speech, discrimination, and erosion of their civil liberties, American Muslims remain optimistic about their status and future in America.

Muslim Americans report being better off and more optimistic in 2011 than they were in 2008. Their life evaluation ratings have increased more than any other American religious group: 60 percent are thriving in 2011, up 19 percentage points from 2008. They are also more hopeful about their future than any other major religious group. They rate their lives in 5 years at 8.4 on a scale of 0 to 10, compared with 7.4 to 8.0 among other major religious groups and are more likely to see their standard of living getting better in 2011 (64 percent) than they were in 2008 (46 percent).

More than other groups, Muslim Americans believe the economy in 2011 vs. 2008 has improved. They tend to vote Democrat and are happier with the political climate since the election of President Barack Obama (8 in 10 Muslim Americans approve of Obama's job performance, the highest of any other major religious group).

In contrast to their critics who question their loyalty and charge that Muslim Americans do not reject terrorism, Muslim Americans (78 percent) are most likely to reject violent military attacks on civilians and are most likely (89 percent) to reject violent individual attacks on civilians versus other major U.S. religious groups. And, 92 percent say Muslims living in this country have no sympathy for Al Qaeda.

At the same time, 57 percent of Muslim Americans have confidence in the honesty of elections, the highest of all other major U.S. religious groups, and are among the most open group to other faith communities, with 44 percent classified as "integrated," 48 percent as "tolerant," and only 8 percent as "isolated."

For many, one of the most astonishing findings of the Gallup poll may well be the common ground that Muslims share with Jewish Americans in their political and social views. After Muslim Americans themselves (93 percent), Jewish Americans (80 percent) are more likely than Catholics, Protestants, and Mormons (59 percent or less) to see U.S. Muslims as loyal to America.