Texts of Terror and Transformation: A 9/11 Sermon

There are a lot of ways to read the Bible. Some like to read it from front to back, but not many of us do it that way. Almost everybody reads what I call the Good Parts Version—the parts we find meaningful, more or less ignoring the parts that are, to put it indelicately, anesthesia in ink, or are otherwise offensive. Most of us read passages from the Bible that are important to us, or we read books of the Bible that have relevance to the circumstances of our lives in some way. But the whole thing? Reading the whole Bible cover to cover is sort of like a pizza-eating contest—how many slices can you stuff down yourself before you can't bear it anymore? And some slices are a whole lot more nutritious and tasty than others.

But there are ways to read the Bible that give us some sense of the whole book—if indeed it can be called a whole book at all, since really it is more of a library under one set of covers. There are ways to sample this library that give a sense of its contents and a flavor for its many messages.

I offer you one of those ways today. It is inspired by Professor Don Knuth at Stanford, the father of computer programming (and of computer fonts), who created a book called 3:16—each section is chapter 3, verse 16 of every book of the Bible that has a chapter 3, produced in beautiful calligraphy and followed by a commentary. It's a short book, of course, but when you are done you feel like you've experienced the whole Bible. Don tells me that 3:16 is his "algorithm" for getting a sense of the whole scripture.

What would happen if we used 9:11 as our algorithm today?

All of us have been on a spiritual journey since 9/1, because the events of that day deeply disturbed our sense of security, our sense of order. 9/11 shattered our definitions of what is normal living in America and the rest of the world. What helpful perspective does the Bible have to offer us in this time of crisis? What can we see through these little windowpanes that will give us hope, or at least give us useful perspective?

This might be the best news of all: history doesn't have to repeat itself. We really can and sometimes do learn from our mistakes and excesses. Even God, as understood by the writers of the Hebrew Scriptures, learned from his experience and chose not to do things the same way as before. This passage refers to God's rainbow covenant with Noah after the ark landed on dry ground. No more will I kill off the living beings of the world in a flood, he declared. Of course the bad news here is that he didn't swear off mass extinction in the future through some means other than flooding. Hmmm. But at least there is implicit in this rainbow covenant the idea of some kind of progress. Maybe it is two steps forward, one step back, three steps forward, two steps back, but still—history is useful to remember, and awareness of it can lead us to make different choices the next time. God realized that flooding the whole planet was a bit extreme. So he cast down his bow on the ground—an ancient gesture of peacemaking—and it became the rainbow we see today after a rainstorm. Perhaps all of humanity can learn from what led up to 9/11, and what happened afterward, and cast down our bows and do things differently next time.

Exodus 9:11: "And the magicians could not stand before Moses because of the boils, for the boils were upon the magicians and upon all the Egyptians."

This is from one of the plagues that God sent down on the Egyptians for refusing to let the people of Israel go free. God told Moses to take ashes from the kiln, toss them in the air, and the ashes then made boils break out on the skin of all the Egyptians, including Pharaoh's magicians, who were trying to undo the spells that Moses was working against them—leaving the people of Israel alone, of course. The irony in this plague is wonderful, because the kiln was probably one of those used by the Jewish slaves to bake the bricks used to build the cities of the Egyptians.

Think of the ashes raining down on New Yorkers after the collapse of the World Trade Center. I think of my next door neighbor, who is a volunteer search and rescue fireman, who went to Ground Zero to work for a couple of weeks and now has a chronic cough. Think of the way that terrorists turn the tools of civilization against itself: high-tech aircraft destroying high-tech skyscraper buildings. The ashes from the slave-operated brick kilns were turned against the slave-keepers. But what goes around can come around other ways, too. The terrorists turned civilians into targets, and in so doing turned a huge population of American civilians into a galvanized force against terrorism, instantly. When the people of this enormous and fractious nation get organized behind one clear goal, the results are truly awe-inspiring. 9/11 had the exact opposite effect of what was intended by the people who perpetrated it. 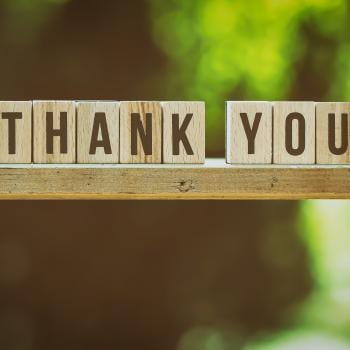 Living Lent as a Lifestyle
Billy Kangas
Get Patheos Newsletters
Get the latest from Patheos by signing up for our newsletters. Try our 3 most popular, or select from our huge collection of unique and thought-provoking newsletters.
From time to time you will also receive Special Offers from our partners that help us make this content free for you. You can opt out of these offers at any time.
see our full list of newsletters
Editor's picks See all columnists