August 03, 2011 by Pat Gohn
"Like" the Patheos Catholic Page on Facebook to receive today's best commentary on Catholic issues. 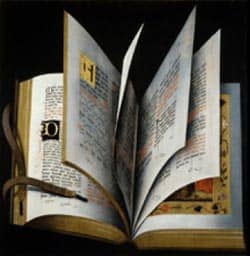 Once upon a time there was a boy from South Boston—Patrick—named for his beloved grandfather, Paddy, or Pádraig, an Irish immigrant from years back. When Patrick was little, his widowed Grandpa lived next door. "The two Paddys," as they were known, were inseparable.

Paddy had come to this country as a young man seeking his fortune and a better life. Eventually marrying and raising a family of three girls, Paddy's oldest daughter Eileen was now married, too. Patrick was her only child, named for her father.

Paddy, whose soft Irish brogue still resonated after decades in America, easily read the nightly newspaper in English, but he rarely took pen to paper unless he was writing to one of his fellow Hibernians. Paddy's only formal schooling took place back in '20s, before he left Ireland, and he invariably wrote as he thought: in Gaelic. His written English was limited to signing his name in his checkbook, and sending his affectionate one-liners inside Hallmark birthday cards. His daughters had kept up with some of the Gaelic that Paddy had taught them, including a few Irish songs, but their American upbringing had little need to know the language of the Old Sod.

When Patrick recalls his happiest childhood memories, Paddy figures prominently in most of them. When he was 11, though, Paddy became very ill and slowly began to fail. He thoughtfully began to put his affairs in order. "'Tis those little tings, don'cha know, that add up," he would often say.

Along with his last will and testament, Paddy wrote a letter to his precious grandson. His wearied fingers scribed the words in his native dialect, still. He gave it to Eileen for safekeeping, knowing his daughter would read it one day, with Patrick. That letter contained all the love and belief that Paddy's heart held for Patrick, his only grandson.

When, after Paddy's death, it came time for Eileen to deliver his letter to her son, Patrick snatched the envelope away and ran to his room to read it. Minutes later, Eileen heard loud wails and crying from Patrick's room. Save the save the wriggled I love you & Lord bless you at the bottom by his signature, it was written in Gaelic; Patrick could not read the rest of the letter!

Eileen and her sisters provided a simple translation, based on the words they could remember from their early life with their Irish "Da." The letter contained a unique prayer for Patrick that he, at once, tried to make his own.

Patrick's young soul felt Paddy's peaceful, reassuring, presence come through the message just-for-him. Over time, he memorized its contents; he could hear Paddy's brogue and see his smile whenever he read it—the voice of his beloved Grandpa, whose love was unconditional and could always be counted upon. Whenever Patrick felt alone, or felt that he was losing his way, he would reread it and pray the prayer. He would remember Paddy's love and faith, and gain new confidence.

Before his senior year in college, Patrick spent his summer backpacking through Europe. His first destination was Ireland; he wanted to see the town where Paddy had grown up, and meet his grandfather's younger brother, Seamus, a retired cop from Dublin.

Seamus regaled Patrick with stories of their youth and guided him through the town, to the cottage of their births. It was memorable day, this first meeting between an aged great uncle and a young nephew.

Patrick had brought Paddy's precious letter with him, and over a pint at the pub, he handed it to his uncle. Seamus' eyes began to tear as he considered this last relic from his long departed brother.

Clearing his throat and adjusting his glasses, Seamus carefully read the Gaelic aloud. The foreign language startled Patrick, who only knew the English he memorized as a boy. Realizing that Seamus' Gaelic far exceeded the previous translation of Paddy's letter, he asked Seamus to carefully explain the letter word for word. As the old gentleman complied, Patrick heard unique phrases—nuances within the original that were new to him. His grandfather's words still moved him, but now, with this new, more accurate translation from a man whose own heart beat in tune with the soul of the writer, Patrick understood them with a greater clarity, and a sense of his Grandfather's intent.

With Seamus' more precise translation, Paddy's letter became an even deeper source of blessing for Patrick. It invited him to hear his grandfather's words anew, and contemplate the profound love that was at their source. He carefully studied each line of translation that Seamus had provided, and slowly committed it to memory, and with successive readings, over time, a more mature Patrick renewed his own love for the one who could not wait to see him again.