Triumph and Trust at Ground Zero

August 18, 2011 by Marcia Morrissey
"Like" the Patheos Catholic Page on Facebook to receive today's best commentary on Catholic issues. 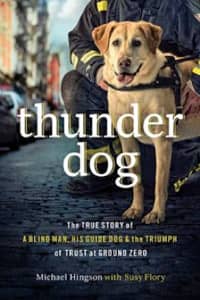 The events of September 11, 2001 changed our reality as a nation, and it is hard to believe we are approaching ten years; it sometimes feels like it happened only a few months ago. I remember so vividly the beautiful early fall day with my kitchen window open to the breeze while I was cleaning, and heard the news on my radio with fear and horror as it unfolded from the very beginning of that unbelievable day.

There were so many incredible stories that emerged from that horrific time. One I recall particularly because of my personal connection; the story of a rather unusual hero named Roselle, a yellow Labrador Retriever. She and her owner, Michael Hingson, had trained at Guide Dogs for the Blind in San Rafael, California, of which I and both of my wonderful Guide Dogs are alums. I know firsthand the mutual love and bond that grows between the blind person and dog as a team. Thinking of the approaching anniversary, I called Joanne Ritter, Director of Marketing and Communications, to see if I could possibly get Hingson's contact information. Joanne not only provided this, but also forwarded a lovely tribute that Michael wrote for Roselle upon her passing just this last June 26, 2011 entitled, "Saying Goodbye to a Hero."

I was able to talk to Michael, and one of the things he said he took away from this experience was how, as we worked to help each other, it united us as a nation. He feels strongly that we need to remember the lessons of 9/11.

Michael worked on the 78th floor in the North Tower of the World Trade Center. Roselle had been taking her morning snooze below Michael's desk when the tower was hit by hijacked American Airlines flight 11, and began to violently rock and sway. Roselle was up immediately—on alert to be ready to follow commands. Before Michael left his office, he quickly called his wife to tell her that there had been an explosion, and he would be home as soon as he possibly could. He didn't know what had happened, but knew that something serious had occurred. His wife, after their quick phone, call turned on the TV; at that point she actually had access to more information than Michael or anyone else in the Tower.

As Michael opened the door to the stairwell, the first thing he noticed was the stench of burning jet fuel wafting down from above. By the time they made their way down approximately thirty floors in the stairwell, the second plane had slammed into the South Tower. No one in his stairwell knew this at the time. He felt people moving up the stairway, and heard applause for the firefighters ascending to the horror above. He clapped them on the back as they passed, very concerned for their safety, and Roselle "kissed" them giving these heroes her special love in only a way she could.

This is a memory about which Michael still feels very emotional.

The heat from many bodies on the stairs was increasing, and Michael was worried about his faithful guide because she was panting heavily with her throat scratched by the jet fumes. His coworker, David Frank, stayed with Michael and Roselle with the plan to get to his car, but that wasn't possible by the time they emerged from the Tower almost an hour after the attack took place. Roselle stopped quickly in the lobby to try to lap up some of the water from broken pipes to quench her thirst. With the crowd of people fleeing, it took another 10 minutes to reach the street.

Michael heard the horrible sound of the South Tower collapse with a noise "like a medal and concrete waterfall." All through this impossible-to-imagine time Roselle remained valiantly focused on her task of getting them safely away from the danger. After the Tower collapsed a cloud of choking smoke, ash and debris rolled toward them. One woman fleeing got some of the things flying around them in her eyes, and couldn't see. Michael took her arm, and together with Roselle helped guide her safely away.

In January of 2002, in the aftermath of 9/11, Michael and Roselle began a worldwide journey serving as the National Public Affairs Director for Guide Dogs for the Blind. As such, they met President George W. Bush and Hillary Rodham Clinton among many other dignitaries. Over the next 6 and a half years together, they traveled hundreds of thousands of miles speaking about trust and teamwork, Guide Dogs and blindness for the organization. Michael says that their goal was "to help people understand that the real 'handicap' of blindness is not a lack of eyesight, but a lack of proper education about blindness." Now Michael owns his own company and still travels the world speaking and consulting with organizations and companies to help them learn more about blindness and inclusion.