9/11 and the Ever-Present Christ 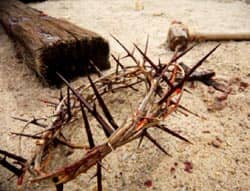 For those who observed it, it was unlike any other day in recorded history. It was seared into the memories of those who lived it. It changed lives forever. In the retelling, its horror still scandalizes people. And writers will continue, and well they should, to use the strongest language possible to describe it.

Immolation of all things holy.

Meanwhile, she stood by, watching it, buffeted by the morbid cataclysm set in motion—eyes riveted, unable to help, and unable to walk away.

Then, all of a sudden, the earth quaked. And an excruciating sword of suffering sliced once-recognizable lives into two distinct halves—before and after that hour.

Hell was having a proverbial field day. Heaven cried.

As Jesus died upon the cross, Mary, his mother, deeply pained and grieving, stood by.

The death of the Savior, God's Only Begotten Son, bore the sins of every single evil action in history—before, during, and since the Crucifixion. In no uncertain terms, despite the wickedness, vice, depravity, sadness, and bad news that unhinges the strongest souls, death and sin have been permanently vanquished through the shedding of the blood of Jesus.

The body of Jesus was raised to perfection after death. Even in its glorified state, it still bears the scars from the wounds of his suffering. Not to remind him of the victory over death and sin, but to remind us. There is the hope of heaven—or restoration and reunion—through the Divine Mercy of Jesus who was crucified, died, and was raised. He lives to come again.

For the Christian, suffering, atrocities, and death, are not the ultimate end.

Intuitively, deep down, we know there is more to life. Humanity knows this about itself. The will to survive and live beyond the grave is innate to the species. It is a holy desire designed in us by God himself, as he crafted man and woman in his image. God our Creator knows us best and longs to see us live in union with him and one another. He built that same longing into us. We know it in the deepest recesses of our hearts, but our experience of it is often dulled by sin and miseries.

The death of innocents, especially when it is perpetrated by our inhumanity toward one another, pummels and bruises our convictions about what is good and true and beautiful about life, and about a God who loves us. Suffering and evil taints our reality to the point that we actually become accustomed to tragedy. Each time we play a different part. We might be a victim, a survivor, or an onlooker.

But the truth is, no matter where we are on the tragic continuum, God is deliberately near to each soul he has made. The Lover of our souls is intimately aware of our circumstances and profoundly in tune with our sufferings.

We know this because God, in Jesus, became a man—a human person like us in all things except sin. He lived, as the prophet Isaiah says, as "a suffering Servant," acquainted with our grief. Entering in the deepest suffering on Calvary, and combating the darkest evil, Jesus gave us a way through the sufferings, sin, and evil we face. It would not be easy, and it would require grace from him.

Jesus knows every victim, survivor, and onlooker even if they cannot fathom God's nearness to them amidst carnage.

How does one go on? How does one begin to pick up the pieces in the aftermath of tragedy?

One piece at a time.

I found it comforting that, in the careful sifting of the fresh rubble of the World Trade Center twin towers, crews performing search and recovery duties unearthed an iron cross. Made of fused I-beams from WTC Tower One, it was erected at Ground Zero as a symbol of hope to the onlookers on site and around the world. The blessing of the cross makes it something more than a symbol. It becomes a sacramental. A sacramental points to something much larger than itself. It reminds us of the sacred in our ordinary lives.

On a day like 9/11, the cross should remind us of the presence of Jesus in the midst of all suffering. Thanks to Christ's victory on Calvary's Cross, it bears particular witness to Christ's presence that day—inside the doomed, scorched wreckage. For, God is everywhere, and Christ is especially present to every person at the moment of death.