September 10, 2011 by Clay Jones
"Like" the Patheos Evangelical Page on Facebook to receive today's best commentary on Evangelical issues. 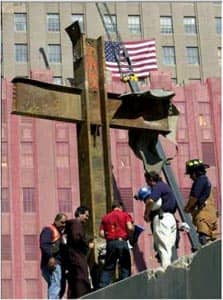 We call the September 11th perpetrators "monsters" and their acts "inhuman." We find those categories comforting because if they really were inhuman monsters, it would let the rest of us off the hook.

But in my fifteen-year-study of why God permits evil, examining atrocities like the Holocaust and other genocides, I've learned that these horrors are precisely human. They indict all of humankind in a very particular way.

And I'm not alone in thinking this, nor is it simply my "religious beliefs" that suggest it. Consider the sobering conclusion of historian George Kren and psychologist Leon Rappoport:

What remains is a central, deadening sense of despair over the human species. Where can one find an affirmative meaning in life if human beings can do such things? Along with this despair there may also come a desperate new feeling of vulnerability attached to the fact that one is human. If one keeps at the Holocaust long enough, then sooner or later the ultimate truth begins to reveal itself: one knows, finally, that one might either do it, or be done to. If it could happen on such a massive scale elsewhere, then it can happen anywhere . . .

So also Holocaust historian Christopher Browning concluded: "I could have been the killer or the evader—both were humans." Or words of sociologist Harald Welzer: "We are left then with the most discomforting of all realities—ordinary, 'normal' people committing acts of extraordinary evil. This reality is difficult to admit, to understand, to absorb . . . As we look at the perpetrators of genocide and mass killing, we need no longer ask who these people are. We know who they are. They are you and I."

Even the victims of atrocity recognize this. "Deep down," writes Auschwitz survivor Elie Wiesel, "man is not only an executioner, not only a victim, not only a spectator: he is all three at once." Primo Levi, also an Auschwitz survivor, agrees: "We must remember that these faithful followers, among them the diligent executors of human orders, were not born torturers, were not (with few exceptions) monsters: they were ordinary men."

Where did this wolf-tribe appear from among our people? Does it really stem from our own roots? Our own blood?

It is our own.

And just so we don't go around flaunting too proudly the white mantle of the just, let everyone ask himself: "If my life had turned out differently, might I myself not have become just such an executioner?"

It is a dreadful question if one answers it honestly.

So we humans would do well to shed the us-versus-them rhetoric and look honestly within ourselves.

Here, theology and philosophy help us avoid an us-versus-them mentality which blinds appropriate self-reflection by preoccupying us with naming the "other monster" in the room. This is not to say that the men who committed these heinous acts are not morally culpable. They are—and they deserve to pay for it! That is justice, not vindication. But we must ask, do we have the courage to examine our own sinful inclinations?

Not only are we often blind to our own 9/11-enablement, we fear facing our mortality, which is exactly what 9/11 and other man-made and natural disasters force us to acknowledge.

You see, as C.S. Lewis has pointed out, the real horror of war isn't that people die. War doesn't increase the mortality rate even one percent—everyone dies. The real horror of war is that death stares us in the face and reminds us of our ultimate destination. After all, only one thing is going to prevent absolutely every one of us from watching everyone we know die from murder, accident, or disease and that will be our own death from murder, accident, or disease.

For the sake of ourselves and for the good of our neighbor, it is humane to face our own mortality and confront how we are 9/11-enabled creatures.

Endless entertainment, whether of sports, sitcoms, or surfing the net, may amuse and distract us.

These are just raw facts about humankind, true for atheist and Christian alike. But if we only stare into the face of our own corruptibility and mortality, despair is inevitable. Who could ever hope again? Thus the liturgy-like rituals of patriotic bereavement seem incomplete. We need someone from outside this world to rescue us, and that's why many of us look to Calvary.