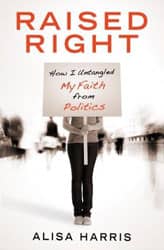 Now featured at the Patheos Book Club
Raised Right:
How I Untangled My Faith From My Politics
By Alisa Harris

Alisa Harris grew up in a family that actively fought injustice and moral decay in America. She spent much of her childhood picketing abortion clinics and being home-schooled in the ways of conservative-Republican Christianity. As a teen she firmly believed that putting the right people in power would save the nation.

But as she moved into adulthood, Alisa confronted unexpected complexities on issues that used to seem clear-cut. So, she set about evaluating the strident partisanship she had grown up with, considering other perspectives while staying true to the deep respect she held for her parents and for the Christian principles that had always motivated her.

Raised Right is not only an intriguing chronicle of Alisa's personal journey; it also provides a fascinating glimpse into how a new generation approaches the intersection of faith and politics.

Whether you are moderate, conservative, or progressive, Raised Right will prompt you to consider more deeply what it means to affirm Christ-like justice, mercy, and righteousness in the current cultural landscape.

Read a book excerpt and author interview at the Patheos Book Club.

Alisa Harris is a writer living in New York City who enjoys writing in quirky coffee shops. A 2007 graduate of Hillsdale College, she has worked as a college instructor in writing and journalism. Her writing has been published in WORLD, CNN, BeliefNet, the Farmington Daily Times, Albuquerque Journal, and Detroit Free Press.  Visit her blog at Patheos here.