About "Religion, Terror and Error" 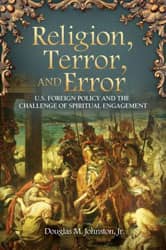 How should the United States deal with the jihadist challenge and other religious imperatives that permeate today's geopolitical landscape? Religion, Terror, and Error: U.S. Foreign Policy and the Challenge of Spiritual Engagement argues that what is requiredis a longer‐term strategy of cultural engagement, backed by a deeper understanding of how others view the world and what is important to them. The means by which that can be accomplished are the subject of this book.

This work achieves three important goals. It shows how religious considerations can be incorporated into the practice of U.S. foreign policy; offers a successor to the rational‐actor model of decision‐making that has heretofore excluded "irrational" factors like religion; and suggests a new paradigm for U.S. leadership in anticipation of tomorrow's multipolar world. In describing how the United States should realign itself to deal more effectively with the causal factors underlying religious extremism, this innovative treatise explains how existing capabilities can be redirected to respond to the challenge and identifies additional capabilities that will be needed to complete the task.

Douglas M. Johnston, Jr., PhD, is president and founder of the Washington‐based International Center for Religion & Diplomacy. Dr. Johnston was editor and principal author of Religion, the Missing Dimension of Statecraft; Foreign Policy into the 21st Century: The U.S. Leadership Challenge; and Faith‐Based Diplomacy: Trumping Realpolitik.

Dr. Johnston is a distinguished graduate of the U.S. Naval Academy and holds a Masters Degree in Public Administration and a Ph.D. in Political Science from Harvard University. He has served in senior positions in both the public and private sectors. Among his government assignments, he was deputy assistant secretary of the navy; director of policy planning and management in the Office of the Secretary of Defense; and planning officer with the President's Office of Emergency Preparedness. He has taught courses in international affairs and security at Harvard and was the founder and director of the university's Executive Program in National and International Security. Dr. Johnston is a Captain in the Naval Reserve and, at the age of 27, was the youngest officer in the navy to qualify for command of a nuclear submarine.

Prior to his current position, Dr. Johnston served as Executive Vice President and COO of the Washington-based Center for Strategic and International Studies. Among his many duties in that capacity, he chaired the Center's Preventive Diplomacy Program and its Maritime Studies Program. He also directed the CSIS project on Religion and Conflict Resolution. His publications include Religion, the Missing Dimension of Statecraft (a seminal work now in its fifteenth printing); Foreign Policy into the 21st Century: the U.S. Leadership Challenge; Faith-based Diplomacy: Trumping Realpolitik; and Religion, Terror, and Error: U.S. Foreign Policy and the Challenge of Spiritual Engagement.

Dr. Johnston's hands-on experience in the political/military arena coupled with his work in preventive diplomacy, has guided the work of ICRD since its inception. In 2007, he received The Founding Spirit Award for Faith by The Washington Times at its 25th anniversary celebration and in 2008 was identified in a leading Christian journal as "The Father of Faith-based Diplomacy."

"Life is a miracle and should be treated as such."
Douglas Johnston

Visit the Patheos Book Club for more conversation on Religion, Terror and Error.