Afraid of the Dark? Or of Being Seen?

When the end comes, if nothing else, it will be poetic. The Ki Savo portion of the Torah contains a list of dark and lyrical images of the curses of madness, bareness, exile and destruction. Preceding the curses is a list of crimes that will bring said curses upon the Jews. The crimes on this list are perpetrated under the cover of darkness upon those who cannot see the perpetrator, literally and figuratively (except for idolatry, whose membership in this list demands another essay). A society where the citizens are afraid of the dark is cursed.

Cursed is the one who perverts the judgments of a proselyte, orphan, or widow (Duet. 27:19).

Cursed is the one who strikes his fellow stealthily (Duet. 27:24)

Cursed is the one who takes a bribe to kill a person of innocent blood (Duet. 27:25).

These are crimes committed against people who are in the dark about the boundaries of their property, the obstacles on their journey, the rightfulness of their verdict, or the killer hiding around the corner. In all these cases, the victims are helpless to stop the attack.

To manage the fear of helplessness against the perpetrator in the night, we curse them with a cornucopia of horrors.  f you commit these secret crimes, then even "the tender and delicate woman among you...will turn against her children—for she will eat them in secret" (Deut 28: 56-57). Fear mongering is an ancient art. The curses we say overflow with the fear of hideous consequences that will surely result from the crimes we fear most. The normative justice of courts cannot assuage the fear of the perpetrator in the night, because his crime has no witness, and thus it cannot be persecuted according to Torah law. To stop unwitnessable crimes against defenseless victims, the perpetrator must believe that she will be seen and thus punished. Here, the curses become a powerful tool for making her believe that she can be seen in the dark. When we curse the thief in the night; we are conjuring her into visibility.

Michel Foucault, a postmodern philosopher, describes the process of making her believe that even in the darkest night she can still be seen. Foucault does this through the metaphor of the panopticon. Thepanopticon is a prison where the guard tower is positioned such that the prisoners cannot see the guard, but the guard can see them. Prisoners begin to monitor themselves in response to the unseen guard, to such an extent that they internalize the state of being watched, and will act accordingly even without bars or visible deterrents. Here, the Torah constructs its own panopticon through a curse, to which "the entire people shall say Amen" (Duet 27:17).

Answering "amen" is fundamental to the curse; it is the source of the curse's power. The Hebrew root of the word "amen" is to "affirm." The requirement that every person affirm each of the curses is necessary for sustaining their effectiveness. Here, the people become the unseen guards of the panopticon. For the panopticon to work, we must all be in on it; we must all answer "amen." We are the watcher and the watched. We pronounce "Amen" in unison to alleviate the fear of the perpetrator of the night, and in doing so, we bind ourselves to the curse. We agree to be cursed so that what we fear may also be cursed. We agree to be watched so that the assassin too will be watched. We continue to make this tradeoff, driven by the timeless fear and poetry of the dark night.

God will strike you with madness and with blindness, and with a confounding heart.

You will grope at noontime as blind man groups in the darkness, but you will not succeed on your way; you will be cheated and robbed all day and there will be no savoir (Duet. 28:28-29).

The savior cannot come because she too is trapped in the panopticon, afraid of the stumbling blocks on the road, the assassin in the valley, and most of all, the unseen guards in the tower. 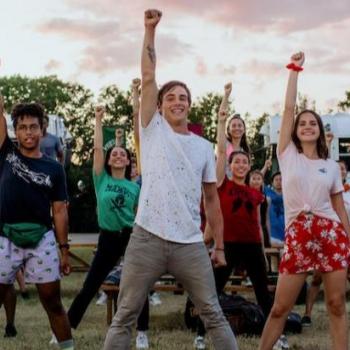 God Loves These 8 Attributes
Ejaz Naqvi MD
Get Patheos Newsletters
Get the latest from Patheos by signing up for our newsletters. Try our 3 most popular, or select from our huge collection of unique and thought-provoking newsletters.
From time to time you will also receive Special Offers from our partners that help us make this content free for you. You can opt out of these offers at any time.
see our full list of newsletters
Editor's picks See all columnists