An Anniversary Call to Arms 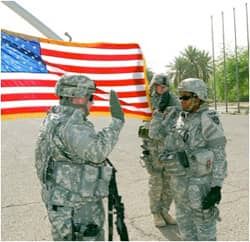 With the Tenth Anniversary of 9/11 comes the opportunity to determine how it should be honored. Clearly it is an occasion to salute the memories of those who fell victim to the attacks, the heroism of the passengers on United Flight 93, the first responders who courageously braved untold hazards to rescue those in need, and everyone else who put their personal safety at risk for the sake of others. Now that most of those who planned this onslaught have been brought to justice in one form or another, it also becomes appropriate to leverage this moment as a "call to arms" to wake up and develop a thoughtful strategy for preventing future attacks.

Beyond our military interventions, the U.S. response in countering religious terrorism has thus far focused on addressing symptoms rather than causal factors. We have taken a number of defensive measures to protect the homeland—improving the security measures for our aviation system; taking action to protect critical infrastructure; increasing the nation's preparedness for a disaster; and enhancing information-sharing among federal, state, local, and international partners. Numerous other steps have also been taken, especially in the areas of intelligence and counterterrorism.

Despite the obvious need to address underlying cause, how to do so remains a puzzle for most policymakers. Respectful engagement with other cultures and countries only takes one part of the way, since that has more to do with good manners than with religious faith. Its own religiosity aside, America's proven inability to understand and deal with the religious motives behind extremist violence has already led to uninformed foreign policy choices in such places as Iran, Lebanon, and, most recently, Iraq.

To avoid similar mistakes in the future, we need to move beyond the rational worldview that has governed our practice of international relations for most of the last century to a process that includes religion and other so-called "irrational" factors. It will also require that we broaden our basis for understanding the religious dynamics at play and optimize our opportunities for responding effectively. To continue discounting the impact of religion in the affairs of state when it provides the principal source of identity, meaning, and purpose for 84 percent of the world's population would be foolish in the extreme.

How to give religious motives and imperatives their just due in our conduct of foreign policy is explained in some detail in my new book, Religion, Terror, and Error: U.S. Foreign Policy and the Challenge of Spiritual Engagement. (Visit the Patheos Book Club for more conversation on this book.) Among other measures, it calls for 1) determining which of our existing assets can be usefully redirected to help deal with the problem, and 2) developing whatever new capabilities are required to bridge the remaining gaps. It then examines each of those assets and capabilities as pieces of an integrated whole.

Like other religions, Islam has its extremist elements. It also has an illustrious history, which includes numerous contributions to the civilization we enjoy today. The terrorist attacks of 9/11 are no more representative of Islam than those of the Ku Klux Klan are of Christianity (the onerous deeds of the so-called Lord's Resistance Army in Uganda also come to mind). And just as Osama bin Laden rallied his followers by quoting religious scripture out of context (e.g., "slay the infidels wherever you find them"), so did the Dutch Reformed Church do precisely the same in justifying the practice of apartheid in South Africa. Religion is a double-edged sword that can either cause conflict or abate it. To focus on the former, while ignoring the latter is to deprive oneself of a critically important asset in countering religious violence. To my way of thinking, the best way to deal with Islam is to make a concerted effort to understand it, first of all, by getting to know a Muslim.

The occasion of this tenth anniversary of 9/11 should serve as an inspiration to build bridges, rather than walls; and here, it is important to note that attitudes toward Muslims are markedly different (better) for those who actually know a practicing Muslim versus those who do not. In the absence of such exposure, it becomes easy to dehumanize the entire community. To buy into the uninformed Islamaphobia of late-night radio talk shows is to do a disservice to oneself and to the country more generally. Perceptions of the American Muslim Community as being either a persecuted or marginalized community play directly into the hands of the terrorists.