As the Towers Fell, Heroes Ascended 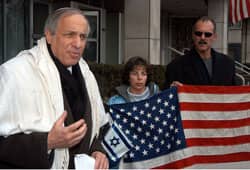 There are moments that remain forever fresh, as if they've just occurred. For most Americans, 9/11 falls into this category. In my case, the scene from that first day and days after never fades.

Immediately following the attack on the World Trade Center, I set out from 53rd street, making my way south to the site of the devastation. It was as if something—someone, a congregation of holy souls—was calling me.

As I drew nearer, it became difficult to breathe. I waded through a white, otherwordly dust, which at times reached up to my ankles. The scene was apocalyptic, horrifying; the extent of the evil inflicted upon it made it seem almost polluted, impure. But soon, I was overwhelmed by the very opposite realization—my sense of the sanctity of the place. This was where innocence had been violated by evil. It had become a holy place. I had entered the precincts of holiness.

This holiness encompassed not only those who had been lost to terror, but those (unlike myself) endowed with essential life-saving skills—firefighters, police personnel, sanitation workers, doctors and nurses—who had converged on the site. The heartbreaking image of the makeshift triage center on the night of 9/11 will never leave me. Set up in Stuyvesant High School with beds and the full array of emergency equipment, doctors and nurses stood awaiting the casualties.

The wounded never arrived. As the stark realization of the finality of the catastrophe set in, medical personnel sat down with heads in hands, overcome. I understood to my great sorrow that what remained now was to comfort and minister—and this, at least, with my pastoral experience, was a service I could offer. An image that will remain with me from those early days is of standing as one member of the clergy among many others of all faiths as police and firefighters snapped to attention when the remains of a comrade were taken out—remains not necessarily whole or intact, a limb, perhaps, a finger, a toe—all holy. And those rescue workers who stood there, giving them honor—all holy.

This black tear in the world, which became known as Ground Zero, was beyond anything I had ever before witnessed. It will remain forever in my consciousness as a dark foreboding of what is possible—an emptiness, an absence, a silence.

And now, ten years later, New Yorkers and people around the world will pause to remember. The goal will not be to dispel the darkness but to live with it. It's much like walking into a dark room crowded with furniture. The first time we enter, we grope blindly, we bump into everything, we stumble everywhere. But after a time, when we enter, although the room is still dark, we know where the obstacles lie. We no longer fall. We have found our way.

But on this 9/11, we should set aside all the criticism and offer thanks: To the first responders who heroically risked their lives and sometimes lost them in their efforts to save others; to the families of the victims who have taught us how to bear the unbearable while keeping alive the memory of those they lost; to those who work everyday to protect our homeland and keep us safe; and to leaders who have counseled Americans to remain both strong and just, not to condemn members of one faith for the crimes of its extremists.

The 9/11 image played over and over is that of the Twin Towers collapsing. On this 9/11, let us remember that as those buildings came down, heroes ascended, reaching higher and higher, showing the way for us and the world.