Becoming American: A Q and A with Yvonne Haddad 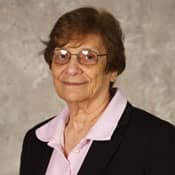 Who is Arab? What is Islam? Who decides? In Becoming American?, Dr. Yvonne Yazbeck Haddad, one of the leading scholars of Islam and Muslims in North America, traces the history of Arab and Muslim immigration into Western society and explores questions of identity in a post-9/11 world. In this new interview, Haddad reflects on the diversity of the American Muslim community, the media's proclivity toward Islamophobia, and how moderate Islam is shaping the public and political landscape of the future.

(Visit the Patheos Book Club for more conversation, plus excerpts and videos from Becoming American?)

What is your working definition of "Arab"? What about "Muslim"? How is each represented in America today?

The definition of an Arab has varied during the twentieth century. At the height of Arab nationalism, an Arab was defined as anyone who lives in an Arab nation, speaks Arabic and identifies with Arab heritage. During the Gulf war of 1991, some people in the Arabian Gulf identified themselves as the true Arabs and designated those in the north (Iraq, Syria, Lebanon, Palestine and North Africa) as Arabized people. Generally speaking, citizens of the 22 nations that constitute the Arab League are considered Arabs.

A Muslim is one who believes that the Prophet Muhammad was the recipient of the Last revelation from God, which is preserved in the Qur'an. Not all Arabs are Muslim. (There are Arab Christians, Jews, and Druze.) And not all Muslims are Arabs. In fact, Arabs are a minority among Muslims, with largest population of Muslims residing in Indonesia, Malaysia, South Asia, and Sub-Saharan Africa.

The first section of your book is a comprehensive history of Arab and Muslim immigration into Western society. Why has this story been largely ignored in American history?

The history of Arab and Muslim emigration has been ignored because of their small numbers relative to the population of the United States. From the beginning, they have been subjected to intense discrimination and have tended to seek integration into American society while keeping a low profile.

9/11 had a profound impact on shaping American Muslim identity. Can you describe that impact, and both its negative and positive effects?

9/11 focused American attention on Arab and Muslim Americans. It precipitated the passage of the Patriot Act, which stripped them of the protection of constitutional guarantees. It sanctioned without notification the monitoring of bank transactions, telephone conversations, e-mail messages, books purchased or borrowed from libraries, credit card purchases, and so on. It brought an end to political correctness. Demonizing Islam and Muslims became acceptable, a fact that has spawned the Islamophobia industry, with individuals and organizations profiting from speaking and writing about the threat of their presence.

The Muslim community has responded by opening its mosques to the general public, inviting them to come and discuss common issues, to check for themselves that mosques and schools do not teach hatred. It has also led to Muslim involvement in interfaith activities, to collaboration and cooperation with social service and human rights organizations in the United States. Muslim women and youth have become more noticeable in the public sphere as they engage with the American public.

A recent Brookings Institute poll and report entitled "What it Means to be American Ten Years after 9/11" shows that cable news, and specifically Fox, plays a role in creating negative images of Islam and Muslims. How are Muslims combatting these negative images?

There are several individuals and think tanks that specialize in promoting Islamophobia. A recent study revealed that several foundations donated 42 million dollars to the Islamophobia industry. The Muslims realize that they are incapable of combating these negative stereotypes by themselves. This is why they are collaborating with other American organizations and church and synagogue leaders to try and temper the hatred that is spewed by these organizations.