September 21, 2011 by Jeff Walton
"Like" the Patheos Evangelical Page on Facebook to receive today's best commentary on Evangelical issues. 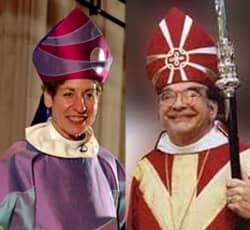 Here's a quick test for you. On the tenth anniversary of the September 11th terrorist attacks, the senior bishops of the two Anglican provinces in the United States gave sermons commemorating the events of that fateful day. See whether you can identify who made the following statements—a) Episcopal Church Presiding Bishop Katharine Jefferts Schori or b) Anglican Church in North America Archbishop Robert Duncan.

On recalling the societal effects of the 9/11 attack:

On how to respond:

And lastly, on loving our enemies:

If you guessed that the odd numbers are Jefferts Schori, and the even numbers Robert Duncan, then congratulations, you passed the test.

Speaking at the historic St. Paul's Chapel adjacent to Ground Zero, Jefferts Schori's sermon was centered on the question: "How will we change hearts that seem closed to learning more about peace?" Duncan, preaching at the Sunday morning services of The Falls Church in Virginia, focused on King David's Psalm 11 and asked: "When the foundations are being destroyed, what can the righteous do?"

Preaching that "our righteousness is not from us, but from another," Duncan answered his question: in the face of adversity, "what the righteous can do is preach the Gospel." As he explained, "We preach salvation in the face of all of the tragedies of the world. We preach salvation by grace, by God's kindness and love through faith in Jesus Christ." The Anglican Archbishop emphasized Christian distinctives in saying that Christians come to church "not only for his word, but also for his body and blood," which he described as a "foretaste of when all these stones will be destroyed, not one left upon another, and when we will be before him in his heavenly kingdom, his heavenly order in which all things will be made new and everything set right by God's power and God's grace."

Duncan simply summarized his answer to the question "What can we do?" with: "Do righteousness, trust God and preach Jesus."

For her part, Jefferts Schori apparently wished to draw the victims and perpetrators of the 9/11 attacks together beneath the banner of moral equivalency. "Pray for all the torturers and terrorists among us," she urged. "Can we recognize the common desire of all the peoples of the world for peace in their own day?"

The two church officials had also differed on mayor Michael Bloomberg's decision not to invite clergy to pray at the official 9/11 memorial service. As Jefferts Schori told reporters following the service at St. Paul's Chapel, "We don't need to be in the center of things, but here for those who need us. And that's what St. Paul's did. They were here for people who needed them."