September 29, 2011 by Matt Emerson
"Like" the Patheos Catholic Page on Facebook to receive today's best commentary on Catholic issues. 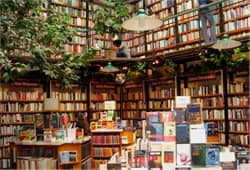 His brow is smudged with condensation and his shirt smeared with sweat. The shirt, draping him like a large towel, looks just-pulled from a washer, but a washer that doesn't clean and in fact is not a washer at all. It's supposed to be a collared shirt, but by mysterious exertions it is now a v-neck. His chest, visible through the v, makes me think of gaunt children in third-world countries.

He ambles toward the table. From pants blotched with paint he removes a mess of tissue. He pats his forehead and half-collapses into a small chair. The movements are uncoordinated, awkward. He is not at peace.

Others nearby, aware of anomaly, look up with displeasure and anxiety.

Is he going to make a scene?

One of his flip-flops is missing a rubber strap, and he's bandaged it with a cloth-like material.

His teeth are yellow. He coughs.

He has books because he is at the bookstore—where I am, in the café, sipping a second cup of coffee, trying to outwit writer's block. I deflate into contemplation. I look at the windows, the shelves, the chairs, and then to the glowing canvas propped before me. I pause and wait for a great subject to emerge, ex nihilo.

My contemplation is interrupted. In walks the man with the cough, the teeth, that drape of a shirt.

I have seen him before. He looks the same. No, he looks exactly the same. Go back a few nights, to the same store, and there he is, half lying down in the history section, reading aloud from God knows what, oblivious to traffic walking by. There's me, a few feet away, flipping through The Screwtape Letters, joining customers in a conspiracy of not noticing.

Now we intersect again, in the café. I can't think of anything to write. I look at him. He shakes his head violently up and down, congratulating vigorously the text in front of him. It's the New Revised Standard Version. A book on the Vatican - glamorous, glitzy pictures of St. Peter's - lies cracked open next to it. A book on novenas with huge letters ("NOVENAS") completes the trilogy.

He closes the Bible and over it folds his hands—the woman with the Louis Vuitton bag briefly obscures my view—and now his beaded forehead rests on those hands. A frustrated student? No. Pain. These are contortions of agony and anger. He is reliving something.

But he seems to be laughing, too.

"Men do not sham Convulsion, / nor simulate, a Throe."

Is he laughing or not?

He stands; he kneels; he mumbles. He swats at something in the air—or conducts a symphony.

Is he going to make a scene?

A blue pen materializes and he begins to write on a napkin. He is not writing. He is twisting the top of a jar that cannot be opened. Sealed too tight.

What is his deal?

The conspiracy resumes. If we don't notice him, nothing happens. He won't direct that drastic nodding toward us or, my God, shoot the place up. You never know. Best to focus on my writing.

The thought hits me that I haven't been to Confession in a couple months. I had better go today. I have a half hour to get to the Church. Good Catholics go to Confession.

I'm standing in line, waiting for Fr. Howard, in persona Christi. It's a long line, and I lean against the wall in contemplation.

And I wonder: Maybe that's why he—He—was so captivating. He stopped minding his own business, He stopped playing the part, He exposed the conspiracy.

Go ahead. Make a scene. I'm still going to ask you what you're reading.