September 27, 2011 by Lisa Mladinich
"Like" the Patheos Catholic Page on Facebook to receive today's best commentary on Catholic issues. 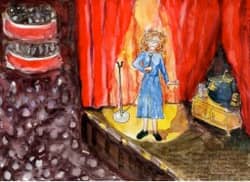 So do not fear, for I am with you; do not be dismayed, for I am your God. I will strengthen you and help you; I will uphold you with my righteous right hand. (Isaiah 41:10)

The afternoon I registered my daughter for her first-grade religion class, I had no intention of signing on as a teacher. I was too busy writing a novel and working as a freelance puppeteer. I simply made the mistake of volunteering to "help out," since I'd be waiting around for her anyway, and got roped into teaching her class.

I walked out of the parish center with my heart in my throat.

I remember, as a young actress, taking solace in the well-known fact that some of the great actors of all time suffered from stage fright, becoming physically ill before every single performance. I believe I can tell you why that is. It's because they are about to do something of critical importance to who they are. They're stepping out in a vulnerable state, emotionally and psychologically, in front of an audience that might judge them harshly.

I wasn't any different. Like most actors, I too had suffered from stage fright. I knew how it felt and how to deal with it. The shaking, I'd been told, was my "talent talking." The desire to flee was just the necessary adrenaline rush. The fear was a sign that what I was doing was important to me.

Yet, the moment I signed on to be a religion teacher, I sensed a new kind of pressure, a fright that was primordial and deep. It had a quality I hadn't felt in the past, not in any theater or in front of any television or film crew. It felt like God was going to be watching me work in a way I hadn't felt conscious of before. Because this time, the old hambone actress wouldn't just be going for a laugh or working an audience for a few bucks; I'd be up there in front of all those precious and innocent immortal souls speaking with borrowed authority about Him.

I am a "re-vert" to the Catholic faith, which means I was brought up Catholic and fell away for a while. I hit rock bottom in 1992, my world in shambles. I had lived outside the moral teachings of the Church. I had been angry and defiant toward God. I had judged all men, myself, my loved ones, the world and God Himself, and found us all profoundly wanting. Bitterness threatened to kill me outright.

Finally, at the point of despair, the Blessed Mother interceded powerfully and drew me lovingly back to the Heart of Christ. At a time when no man could speak a word that I was capable of hearing, she sent the right women in the right order at the right times, like the beads of a Rosary strung together by grace, each one mysteriously and sometimes unknowingly drawing me a step closer to Jesus. Each gave me a piece of a holy puzzle that would not reveal itself fully to me until I was deep into a remarkable journey and hundreds of miles from home.

By the time I returned to what was left of my broken-down life, I had been converted and saved, and the healing had begun in earnest. I had a prayer life and a sacramental life, a new hope and a new longing that replaced all others. And I knew I would never again make the mistake of thinking I walked alone.

Like most converts, the Faith means everything to me. Even all these years since my conversion, there's nothing I'd rather talk about, think about, read about, write about—or teach. It is my center, my world, my everything. I see now that I am less than nothing without it. As painful as the process of discovering this fact was for me, I wouldn't trade that knowledge for anything. God forced me to rely on Him alone and that dependence has transformed my life.

Come back next week for "A Catechist's Story, Part II: First Class Panic."