Warrior is about two brothers who are Mixed Martial Arts (MMA) fighters, and their father. The younger brother is a prodigal son who has, after fourteen years on the run, returned home. The older brother, married with two daughters, is a high school physics teacher about to lose his house; when he returns to fighting in order to earn extra money, he loses his teaching position. The father is a recovering alcoholic, one thousand days dry, who abused the boys and their mother when they were young. The boys are destined from the film's opening to end up fighting in the same MMA competition, and the story flies like a jump-kick toward that conclusion, leaping over every plot hole that threatens to get in its way.

Watching Warrior requires a continuous suspension of disbelief. One must overlook the many convenient coincidences that make the story work. There are more instances of "this scene is happening because we need it to reach the final, unavoidable confrontation" than should be allowed in any movie trying to tell a believable story.

Fortunately for Warrior, it is not trying to tell a believable story. Warrior is all pathos and catharsis. Warrior is a thinly drawn way for its audience to work out its negative emotions about the mortgage crisis and wars of recent years. The characters are drawn with such broad strokes and given such blatant motivations, the audience very easily attaches to the characters' stories and roots for or against them. At its best, this form of storytelling is illuminative, like a parables or a fable. At its worst, it's manipulative, like melodrama and propaganda.

Warrior stands somewhere between parable and propaganda. The film might have approached parable if its resolution had been clearer or its subject less complex. It would also be dangerous propaganda if it were less compassionate and well intentioned. I would rather it be one of the two, because either one would be easier to understand and dialogue with; since it's neither, I left the theater conflicted and confused.

Warrior is thrilling and intense—but also difficult and disturbing. Never in all my years of watching combat films like Rocky, The Fighter, or anything starring Jackie Chan have I so wanted a character to win a fight. For all its maudlin melodrama, Warrior is effective in getting its audience to care about its characters.

But never in my life have I wanted one person to injure another so badly. I never want to feel that again.

MMA and UFC fighting are complex cultural phenomena, and Warrior carries all that complexity into the theater. Also unfortunately, it does not critique the cage. I am not going so far as to say that that MMA and UFC are morally bankrupt enterprises; there is an element of physical combat in all of our sports, and that physicality is part of what makes them compelling. But there is also a brutality represented in MMA and UFC fighting that ought to give us pause. Most distressingly, and, perhaps, most fittingly, Warrior's most cathartic moments are also its most brutal.

Warrior tries hard to be about forgiveness and reconciliation, but it has no idea how to get there. All it knows how to do is beat people down and "hug it out" when all the fight is gone out of everyone. Warrior is juvenile and stunted, seemingly stuck on the playground when its classmates have grown up and learned how to converse.

Many very vocal segments of the Christian population wholeheartedly embrace MMA and UFC fighting. They see it as a way to appeal to young men, who are underrepresented in American churches. Another segment vehemently opposes cage fighting because of the brutality it seems to promote. Neither side seems willing to talk to the other. Like the fighters themselves and their fans, cage fighting is more complex than simple acceptance or rejection. I can point you to an excellent article from a former cage fighter on the subject.

In the last analysis, Warrior is a thrilling yet deeply flawed and disturbing film. I cannot recommend it—but I cannot reject it either. I do ask though that if you see it, think hard about what you are watching. The issues presented are not as simple as the movie makes them out to be.

For Pride Month: Our 2015 Interview with La Sarmiento on Intersections of...
Justin Whitaker
3

Celebrating The Strawberry Moon – And It’s Been A Long Time Coming This Year!
Katie Gerrard
4 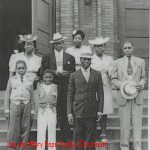 Len and Mary Return to Tell Their Story
Margaret Blair Young
Get Patheos Newsletters
Get the latest from Patheos by signing up for our newsletters. Try our 3 most popular, or select from our huge collection of unique and thought-provoking newsletters.
From time to time you will also receive Special Offers from our partners that help us make this content free for you. You can opt out of these offers at any time.
see our full list of newsletters
Editor's picks See all columnists