It's Forever Personal: A Widow Remembers 9/11 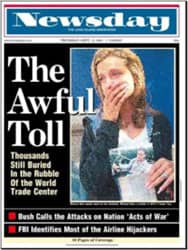 I was born here.

I was at work here on that beautiful Tuesday morning ten years ago. I was in the middle of engineering Doug Limerick's 9 a.m. ABC NEWS network radio newscast when the second plane roared into the World Trade Center, forever changing our lives.

During these ensuing years, the nation has paused in solidarity with us here in New York, at the Pentagon, and in rural Pennsylvania.

With hearts and hands joined, we have honored the nearly 3,000 people who showed up for a normal day's work only to perish in the collapsing towers of the World Trade Center or the fireball at the Pentagon.

We salute the passengers of United Flight 93, whose selfless act of courage—tail-spinning their hijacked airplane into a farmer's field—introduced the world to Shanksville, Pennsylvania, and heroically averted a tragedy at the White House.

Perhaps most importantly, 9/11 stories come from the surviving family members, such as my friend, Monica Iken Murphy, the courageous widow whose inner strength and hard-fought efforts helped make the 9/11 Memorial a reality.

Ten years ago, she was just Monica Iken, newlywed.

On September 11, 2001, she and Michael Patrick Iken had been married less than eleven months. That particular Tuesday morning began as had dozens of others: a good morning kiss for Michael in that half-awake state in which many a spouse sends off their other half to work.

The words are from Monica's eulogy for Michael, his memorial service at St. Patrick's Cathedral, his mourners still numb from the events of the previous week.

The couple had met by sheer accident (or was it divine intervention?) during Labor Day weekend, 1999, at a neighborhood restaurant called Park Place. He was celebrating his upcoming September 8 birthday with his best friend. She and her best friend were out for a Saturday night on the town. He invited the ladies to join them for a drink, but they had other plans and declined.

Later, Monica would learn that after they left, Michael turned to one of his friends and said, "That's the girl I'm going to marry."

The following Saturday—September 11, 1999—Monica and Jen were again headed out. Already behind schedule, it was around 11 p.m. when they had to turn back: Monica had forgotten her ID.

This delay put a kink in their dinner plans, so the pair stopped in at Park Place. Monica noticed a lone man at the bar and sat down near him. While her friend ate, Monica struck up a conversation. The gentleman turned out to be the same guy—Michael Iken—whose offer of a birthday beverage had been politely declined by the ladies the previous weekend.

Iken had had a hunch Monica might stop in that evening; he had been sitting there since about 6 p.m., waiting.

"He began telling me his life story, and the next thing we knew it was 3 a.m.," she recalls.

They exchanged phone numbers. Within three months, he proposed. They moved in together that February and married on October 27, 2000, each for the second time.

A warm smile crosses her face. "Everybody thought we were crazy."

Today, even though she remarried—happily, to "a great guy" with two lovely young daughters—Monica is not shy about telling anyone and everyone that Michael, a trader at Euro Brokers, was/is her soul mate.

"Not long afterward," her eulogy continues, "the phone rung and I was startled to hear your voice. You said you were all right, not to worry and turn on the news. I said 'Okay' and turned on the news, in horror. You called again to assure me that you were safe and to call the family. I wished I could have told you to run from the building. To get out. But I didn't, I couldn't believe what I was seeing. You told me you were safe and I wanted to believe you. I never dreamt those would be the last words I would hear from you."