A Good and Perfect Gift: An Excerpt 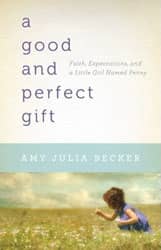 A Good and Perfect Gift: Faith, Expectations, and a Little Girl Named Penny

Again and again that night, I emerged from the blissful anonymity of sleep with my heart racing, as if a door had slammed shut, as if a gunshot had pierced the silence. And then I would remember, and I would tell myself, Your daughter has Down syndrome, and I would try to figure out how I had come to be this person, this mother.

Peter slept straight through, his body rising and falling in a gentle rhythm. They brought Penny in to nurse, and he hardly stirred. But I stayed awake, gazing at her little round face, trying to make sense of it all. I didn't know much about Down syndrome, but I did know that it had happened at the moment of conception, as soon as the chromosomes from Peter's body joined the ones from mine. From the beginning. Before I even knew she existed.

I thought back to that day in early May. In the course of a week, two friends had called. Each of them said, "I dreamed last night that you were pregnant." And so, on a warm spring morning, I took a test. Peter had been on his way out the door to coach a tennis match, and I had asked, "Could you wait about three minutes?" I didn't tell him why until I emerged from the bathroom wide-eyed, smiling. I held out the pregnancy test with its little blue plus sign. He yelped and wrapped his arms around me.

Her hands were so tiny-white fingernails that looked as though she had a manicure in the womb-and a chubby face with an upturned nose and puffy eyes. I gazed at her, and the nurse's words, "He was a gift," came back to me, a simple, haunting refrain.

Peter went out to get coffee in the morning. He returned with a blueberry muffin and a cup of tea just the way I liked it, with one Splenda and a lot of milk. The whole room was a testimony to his care for me-the down comforter and pillow he had brought from home; the laptop computer with speakers set up so I could listen to music; the stack of magazines-Time, The Atlantic, The New Yorker, First Things-in case I had needed a diversion during labor; and the pile of pastel-colored baby clothes on the windowsill.

He had put away the sheets and pillows from his own makeshift bed and now he sat next to me, elbows on knees, both hands around the coffee cup, eyes down. I wanted to talk, but I didn't know what to say. The question that repeated itself inside my head was, How could this happen? When I tried to come up with an answer, all I could think was, We haven't done anything to deserve this. We haven't done anything wrong. And Down syndrome is the one thing she can't have, the one thing we ruled out.

Halfway through my pregnancy, in August, Dr. Mayer had called. Peter and I were on vacation at my family's summer house. It was midafternoon, and we sat side by side in beach chairs overlooking the water. The air was clear enough to see Long Island, miles away. Its sandy beaches were obscured. Only the trees met my eye, as if they were floating above the water with nothing to anchor them in place.

"I've been trying to track you down," Dr. Mayer said, a hint of admonishment in her voice.

"I'm sorry," I replied. I sat upright, like a kid in school who had been caught not paying attention.

"We got some test results back," she said, more gently. "From the quad screen you had last week. We've been leaving messages at home, but I really needed to get in touch with you."

I moved my sunglasses to the top of my head, as if I could look Dr. Mayer in the eye. Peter put his book aside.

"The results show a 1 in 316 chance that your baby has Down syndrome. Technically, that's not considered a risk. One in 250 counts as a risk. But you're so young. For a woman your age, the risk should be closer to 1 in 1,000. You might want to do some follow-up tests."

She went through the options. A definitive answer could only come via an amniocentesis, but it posed a slight risk of miscarriage.

Peter and I had already agreed we wouldn't terminate the pregnancy in the event of abnormalities, so we scheduled a Level Two ultrasound one week later. And we rejoiced when the technician reported, "This baby may be many things, but it won't have Down syndrome."