Jesus and Muhammad on War and Peace: A Q and A with Lee Camp 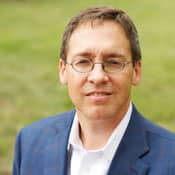 In his provocative new book on Christian and Islamic views of war, terrorism, and peacemaking, Lee Camp invites American Christians to examine their own role in religious violence and seek to understand our enemies. In this exclusive interview, Camp responds to questions about loving and understanding our enemies, the theory of "just war," and the dangers of Christianity being co-opted by a secular state.

(For more conversation on Who Is My Enemy? visit the Patheos Book Club here.)

One of the main premises of your book is that we, as Christians, say we are followers of Jesus, but we act more like Muhammad. What do you mean by this?

I try to state this premise somewhat differently: when one compares the fundamental "Jesus-story-logic" with the "Muhammad-story-logic," and examines the manner in which those two very different stories relate to an ethic of war and peacemaking, we find that the mainstream Christian tradition of the so-called Just War tradition looks more like Muhammad's teaching (as evidenced in the Quran) than Jesus' teaching (as evidenced by the New Testament and the early church).

Why did you feel compelled to write this book now?

I was propelled into this project by an experience I had in Nashville. A lecture I had given, on the Christian theological grounds for peaceful coexistence with those of other faiths, strangely found its way onto the front page of the Nashville newspaper. By the end of the day I had received all sorts of very angry emails and phone calls from literally across the world—from California to Manhattan to Tel Aviv to New Zealand—and had heard from FOX News in New York and talk radio in Detroit. It was a surreal experience, and I started wondering what was behind such a reaction.

Why did you choose to alternate a discussion of Christian and American beliefs with Islamic beliefs?

Prior to this project, most of my own theological study and investigation had been "intra-mural," one might say: that is, looking at various Christian teachings and how they compare and contrast with other various Christian groups. There is much to learn this way. For example, if one compares the teaching of 16th-century Roman Catholics with that of 16th-century Lutherans with that of 16th-century Anabaptists, one may learn fascinating things about the ways in which social context and historical factors shape the particular expression of a Christian conviction.

But one may gain an altogether different sort of insight when one compares fundamental Christian teaching—that Jesus, the one we claim to be the Messiah, was tortured, crucified, and raised, for example—with fundamental Islamic teaching—that Jesus, a faithful prophet of God, was not crucified, and that Muhammad was vindicated not through suffering but through military victories. Exploring these very basic and fundamental "story-logics" can be wildly enlightening. One might go a life-time as a practicing Christian and not see some of the implications of the basic Christian story line, at least not until one begins to compare such a claim with competing faith traditions.

So, I try to weave a story in the book, highlighting major developments in the Christian tradition (which is diverse and varied), comparing and contrasting them with the basic developments in the Islamic tradition (also obviously diverse and varied). It is, as some have said, a provocative way to discuss the matter, but I think it helps us see things clearly we may not see otherwise.

In your mind is there a difference between seeking to understand an enemy and loving an enemy?

Certainly. Any good military commander will try to understand his enemy so he can better defeat or kill or otherwise incapacitate the enemy. But this may have nothing to do with the "love" prescribed in the New Testament. Biblical "love" seeks the objective good of one's neighbor. Such love does not, I rush to say, entail any sort of justifying or excusing the wicked deeds of another. At the same time, seeking to understand one's enemy in a way that is consistent with biblical love means that we seek the good of the enemy, not their subjugation or death.

Summarize in a few sentences the ways you believe the Church fails to live by the Just War theory.

In more than a decade of teaching hundreds and hundreds of undergraduate Christian students, I have had only one or two students who knew anything about the criteria of the Just War tradition. If our churches do not teach it, and Christians do not know it, then clearly we are not living by it. This claim is substantiated by looking at the gross excesses of war committed by professed Christians, which are patently immoral according to the Just War tradition—the burning alive of hundreds of thousands of civilians through obliteration bombing campaigns in World War II, for example.