September 20, 2011 by Lisa Mladinich
"Like" the Patheos Catholic Page on Facebook to receive today's best commentary on Catholic issues. 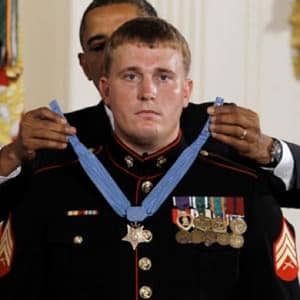 He rescued me from my powerful enemy, from my foes, who were too strong for me.
(Psalm 18:17)

It's all over the news. Ambushed by Taliban forces, American troops pleaded desperately for air support that came way, way too late. Four soldiers were trapped in a house and many others in the open road leading to the village where a meeting with locals was supposed to have taken place. But it was a setup, and now they were calling for help from a command center that, inconceivably, couldn't be bothered to divert resources. Hopelessly outnumbered, a young farmer's son and a couple of buddies showed extraordinary heroism, passing through an overwhelming hail of gunfire and explosives again and again, rescuing dozens of their comrades, but ultimately unable to save the four who had led the unit on its fateful morning hike.

Watching the 60 Minutes interview with Marine Corps Sgt. Dakota Meyer, I turned to my husband, tears streaming down my face, and said, "I feel like my dad is surrounded like that, and I wish I could go in and pull him out."

My father is in the hospital, elderly and frail, and fighting for his life. A retired veteran of the Vietnam War, Robert Kinlock Kirkwood was a shy, bookish kid who grew up in a broken home, dropped out of high school, and joined the Navy so he could see the world. Flat-footed and under-age, he faked his way in and was trained as an airplane mechanic. He married, got his high-school equivalency and then started taking college courses. When the war started, officers were needed and he passed the test. And when pilots were in short supply, he jumped on that, too. Against all odds, he was selected as a fighter pilot and would distinguish himself in air-to-air combat, receiving the Silver Star.

The poor boy from Fall River, Massachusetts had made good. A faithful Catholic husband with a good marriage, he raised six kids with his beautiful Barbara. A natural adventure leader, he inspired confidence, took us all camping and sailing, and taught us independence and resourcefulness. He labored for decades as a catechist. When I was a dreamy-eyed kid, making up my first stories, he gave me his old manual typewriter and a tape recorder, put braces on my teeth and explained the importance of a nice smile out there in the world. He shared his modest earnings with anyone who needed help. He prayed the Rosary and went to daily Mass. But now old age and a systemic infection has our beloved soldier pinned down and fighting for his life. And I'm so grateful for the many prayers that are pouring in on his behalf.

Exhausted from sleepless nights and grief over my dad's condition, I was preparing to teach a workshop for catechists this past Saturday. The night before, I reviewed my notes. This workshop has meant a great deal to me. My first published work is based on it. After my husband and my child, it's my life's mission to encourage teachers of the Faith, so I'm usually really pumped and excited about sharing it. But the script in front of me seemed meaningless, nothing but words to my bleary, worried mind; so trivial compared to the drama playing out in a hospital 200 miles away.

So I prayed, "Lord, if anything good is going to happen at this workshop tomorrow morning it will be all You. I have absolutely nothing."

Morning dawned painfully. Another sleepless night. I was afraid to get behind the wheel of my car. But the prayers of others have brought a number of truly striking graces to me and my family in recent days, so I yielded it all over to God. And in a brief review of my notes my heart suddenly leapt forward to Holy Family Parish in Hicksville, New York, where catechists—my fellow soldiers—would be waiting for me.

And my experience was a good one. In fact, it was the best teaching experience of my life to date. Air support was powerfully in evidence, in the kindness of the wonderful Director of Religious Education (DRE) who hosted, and her beautiful catechists, and words and energy that flowed through me effortlessly. It was pure delight. And a tired, middle-aged woman with red-rimmed eyes was praised and patted after the two-hour workshop, like a hero receiving a medal.

And now I'm packing to go see my own, dear hero. To hold his hand. To hope for the sight of his blue eyes, open and still able to recognize me. To tell him that I love him. Trusting that this dear soul will someday be part of a heavenly family that has never, ever let me down. Knowing that, no matter what, air support is on the way.

In the peace of Christ, through Mary,