A Return to Repugnance 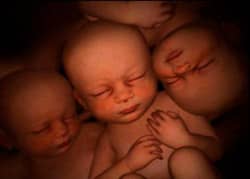 In high school, I had to read Brave New World and other literature that portrayed a future filled with the results of fundamentalist science. Whether Nathaniel Hawthorne's The Birthmark or Mary Shelley's Frankenstein, the works tried to warn audiences that the drive to conquer nature, human or otherwise, could lead to great, irreparable harm, or to a society where humans would be homogenized and programmed, like iPads with lungs and limbs.

Though I sympathized with the writers' concerns, I found the stories strange. They seemed only partially relevant. We were a long way off, I thought, from dystopian days.

Eleven years later, quite suddenly, all that literature seems not only interesting, but terrifyingly real. Why now?

It is not Hawthorne or Huxley, but—and my, how fitting—the New York Times that has validated almost two centuries of admonition. In a recent issue of the New York Times Magazine, a story titled "The Two-Minus-One Pregnancy" reported on the rise in the number of women who are pregnant—pregnant, actually, with twins or more—and who choose to abort one or even two of them. In the revolting language of the inflictors, this is called "reduction to a singleton."

To read the article is to feel as though Dante has led one to some part of hell not covered in The Divine Comedy. After the first few paragraphs of detached, almost commiserating accounts of women and doctors who eliminate siblings, my mind turned to the responses my education has primed me to give, the typical resort to deficiencies in constitutional law and the moral and philosophical arguments for protecting unborn life.

But the more I read, the more I relinquished these thoughts in exchange for bewildered silence. I had no choice: The old arguments—quarreling over Roe, debating about viability, debating the onset of "personhood"—seemed outmatched and outdated. Something had changed, and drastically.

The conviction hit me: We had arrived. We had arrived at the future we were cautioned about, the place where human life had no value except as a field of experimentation, where men and women manufactured life like canned food. Here, in this new place, unborn babies are called "singletons" and willful killing excites all the moral energy of selling a home.

You have to read the article to begin to absorb how bad things have become. It opens with a focus on "Jenny." At the time she became pregnant, Jenny was 45. She had gone through six years of fertility drugs, ovulation injections, and other medical interventions. Finally, she conceived twins. And yet . . . "and yet here she was," said the article, "14 weeks into her pregnancy, choosing to extinguish one of two healthy fetuses, almost as if having half an abortion. As the doctor inserted the needle into Jenny's abdomen, aiming at one of the fetuses, Jenny tried not to flinch, caught between intense relief and intense guilt."

Jenny's story is on the first page of the online edition. By page 4, if your brain and heart are still conspiring to continue, you read about Shelby Van Voris. At 30 years old, Shelby conceived triplets, having artificially inseminated herself with her husband's sperm, a husband who was then deployed in Iraq.

"It was horrible," Shelby told the Times reporter. "I felt like the pregnancy was a monster, and I just wanted it out . . . My No. 1 priority was to be the best mom I could be, but how was I supposed to juggle two newborns or two screaming infants while my husband was away being shot at? We don't have family just sitting around waiting to get called to help me with a baby."

Her response to this unbearable oppression?

She had not one, but two abortions. She killed two of her triplets—or, as her lovely vocabulary might phrase it, two "screaming infants.

What the article describes next might be the most chilling thing I've ever read:

She paid $6,500 for the reduction and left Evans's office incredibly relieved. "I went out on that street with my mother and jumped up and down saying: 'I'm pregnant! I'm pregnant!' And then I went and bought baby clothes for the first time."