The Testimony of Two Towers 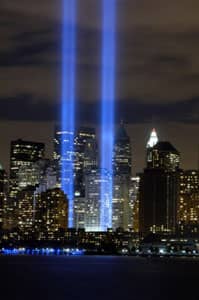 Just because it's a cliché doesn't mean it's not true: you don't know what you've got 'til it's gone.

Take youth; as I near the midpoint of my third decade, I grow steadily aware that I am no longer a youngster, but I have no idea when this unfortunate turn of affairs took place. And what of the innocence and childlike optimism that many of us struggle to preserve for as long as we possibly can? I fear mine fled years ago, swift-running with time, itself.

As the tenth anniversary of 9/11 draws near, New York-based cartoonist Dan Meth has crafted a moving reminder of something which all of us, but especially movie fans, took for granted for many years: the Twin Towers themselves.

New York's brief stint at the apex of the film industry fell prey many years ago to Hollywood's endless sunshine, making it easy for West Coasters like myself to forget how many films where made (and continue to be made) in The Big Apple. The number of cinematic stories that played themselves out at the feet of New York's twin giants is extraordinary—nearly 700, by unofficial count—yet repeated exposures to the city's once-legendary landmarks do little to blunt the visceral response they now produce in countless viewers.

For me, glancingly familiar with New York's skyline, I would expect to be prepared for the encounter. Their towering presence in the closing moments of Scorsese's Gangs of New York was hardly a surprise, and the pivotal role they played in King Kong's ill-advised remake was equally predictable. How surprised could one be by the glances they afford in Superman's flying sequences, or Snake Plissken's bizarre escapades in Escape from New York?

Yet it is often these briefest of glimpses that hit the hardest. Mere moments of Serpico or Manhattan are all that is needed to bring memories of that dreadful September morning flooding back. One moment, I am listening to the strains of Gershwin's "Rhapsody in Blue" and the black-and-white opening of Woody Allen's masterpiece wafts across the screen; the next, I am transported to the floor of our apartment—my wife and I huddled around the radio, turned to stone by New York's anguish and distress.

Each flickering image of the city's two sentinels is a chilling reminder of that terrible day, and it is difficult to see them without hearkening back to the horror and despair that accompanied it. Despite all the filmmaker's best efforts - the story and talents on display before me—I find myself distracted and pulled, film after film, by the dreaded memories and emotions they unintentionally produce. To see the World Trade Center in all its glory is a too-keen reminder if all that we Americans once had, and of all that we have lost.

Yet, in the 10 years since September 11, 2001, I have found myself increasingly (even profoundly) encouraged by their absence. While images of the World Trade Center's doomed and smoky spires fill me with fear and sadness, the emptiness left behind by their destruction has produced a very different emotion.

The absence of the Twin Towers has become more to me than simply an ache or a deficit—much more than a 110-story reminder of American vulnerability. The controversies surrounding its rebuilding linger on in a clear display of the acute pain and suffering still felt by those most impacted by the tragedy, but the need to rebuild has grown steadily less powerful in my mind. Shots of the shoreline once dominated by the twin towers no longer hit me like a punch to the solar plexis; they don't remind me of our engineering prowess or our economic might. Nor, however, do they remind me simply of the terrible tragedies of that day.

Rather than a space that needs to be filled, the absence of the World Trade Center has become its own monument; as we struggle to cope with what we have lost, the absence itself becomes a memorial to those we wish to memorialize.

The emptiness of the New York skyline is an emphatic reminder of the extraordinary heroism, nobility, and self-sacrifice that rose from the ashes on that day—a heroism that represents New York just as surely to our generation as those two great buildings did in the decades before September 11, 2001. And as long as we can see these vacant spaces and remember our heroes, we will not be defeated or disheartened by those seeking our abolishment; we will have won.

I miss the Twin Towers, and I grieve for their loss. But I don't want them back. The witness of their absence is too valuable for me to give up.