Muzzamil Hassan is serving a 25-years-to-life sentence for the murder of his wife, Aasiya Hassan. In 2004, Hassan founded Bridges TV, a Muslim television network whose purpose was to combat negative stereotypes of Muslims in entertainment and news media. Hassan's wife was the station's general manager, and it was into the Bridges TV studios that Hassan lured his wife in February 2009, stabbed her forty times with a pair of hunting knives, and then beheaded her.

Hassan was a serial domestic abuser. Two previous marriages ended in divorce amid accusations of chronic domestic abuse. Aasiya Hassan had also filed for divorce, and prosecutors claimed that Hassan's violence toward his wife was retaliation for her attempts to dissolve the marriage. Hassan's parole hearing is scheduled for October 2033. For the American Muslim community, especially in Buffalo, NY, Hassan's crime was a blow in light of the groundbreaking work Bridges TV had done and because Hassan has been considered one of the "friendly faces" of Islam. The murder also served as a wakeup call within the community to the issue of domestic violence. 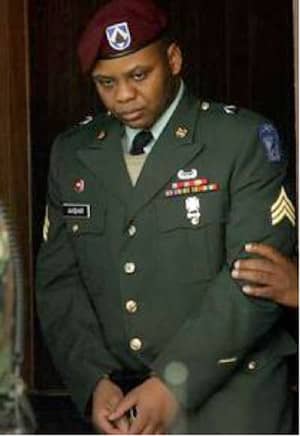 Hasan Karim Akbar was convicted of the double murder of two officers of the 101st Airborne Division at Camp Pennsylvania, Kuwait on March 23, 2003. Camp Pennsylvania was a "rear base for the Iraq invasion." Along with the murders of victims, Army Captain Christopher Seifert and Air Force Major Gregory Stone, fourteen other soldiers were wounded in the shootings and hand grenade attack. Akbar (who had his name changed from Mark Fidel Kools by his mother after she married a Muslim and converted to Islam) allegedly was motivated by resentment. One of his diary entries in 2003 prior to the attacks said he was being mistreated by fellow soldiers: "I supposed they want to punk me or just humiliate me."

Prior to the attack, Akbar also wrote, "I may not have killed any Muslims, but being in the army is the same thing. I may have to make a choice very soon on who to kill." And after being arrested, Akbar reportedly said, "You guys are coming into our countries, and you're going to rape our women and kill our children." Akbar's lawyers argued he was mentally ill, but he was convicted and sentenced to death. Before he was sentenced, Akbar told the jury, "I want to apologize for the attack that occurred. I felt that my life was in jeopardy, and I had no other options. I also want to ask you for forgiveness."

Aimal Qazi, also known as Mir Aimal Kasi, became an image of Muslim violence in 1993 after he opened fire on a line of vehicles turning into CIA headquarters in Langley, Virginia. Two men died, and three others were wounded. Because police were not able to identify Qazi's vehicle, he drove away without being pursued, and flew to Pakistan the next morning. A month later, he was charged for the crimes, and a long manhunt ensued. Qazi was arrested in Pakistan in 1997. In 1998, he was sentenced to death, and was executed by lethal injection in 2002.

Qazi said his shootings were inspired by his anger over United States' policies toward the Palestinian people. The final statement he offered before his execution was, "There is no God but Allah."

Jose Padilla, also known as Abudllah al-Muhajir, was arrested in Chicago in May of 2002 on suspicion of plotting a "dirty bomb" attack after returning from a trip to Afghanistan, Iraq, Egypt, Saudi Arabia, and Pakistan. Padilla was detained at first as a material witness to the 9/11 attacks, but then President George W.

Bush designated him an "enemy combatant" and had him transferred to a military prison. After pressure from civil liberties groups for more than three years, the charge was dropped and his case was moved to civilian court, where in 2007 he was found guilty of conspiring to kill people in an "overseas jihad" and to fund and support overseas terrorism. The claims that Padilla was plotting to release a "dirty bomb" were dropped.
:::page break:::