Truth, Forgiveness, and the Tragedy of 9/11

September 10, 2011 by Daniel B. Clendenin
"Like" the Patheos Evangelical Page on Facebook to receive today's best commentary on Evangelical issues. 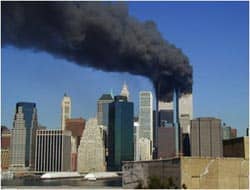 A month ago my wife and I were in New York City and went to the World Trade Center site. Standing there and contemplating what happened made the hair on my neck and arms stand up. America will never forget the trauma of the 9/11 tragedy, nor should we. Ten years later people still remember where they were when they heard the news. I was badgering my son to turn off the television and get to school. He said that something really bad was happening on CNN.

On September 11, 2001, nineteen Al-Qaeda terrorists hijacked four commercial airliners in a coordinated suicide attack. One plane slammed into the North Tower of the WTC, another into the South Tower, a third one plowed into the Pentagon, and a fourth plane that had targeted the U.S. Capitol or the White House crashed in rural Pennsylvania after passengers wrested control from the hijackers. Nearly 3,000 people from 90 countries died in the carnage, including 343 firefighters and 60 police officers. Although he first denied any responsibility, on October 30, 2004, Osama bin Laden said that he had directed the attacks.

Why did Al-Qaeda attack America? How should Christians respond? Ten years is a long time, but it still might not be long enough to understand the tragedy. Preaching at the National Cathedral after the event, Billy Graham observed that no one really knows why such catastrophic evils happen. What follows, then, are a range of reflections more than an adequate explanation.

Throughout history, nations and non-state actors have justified their wars with all sorts of rationalizations—territorial expansion, retaliation, protection, self-defense, and to spread their economic and political ideology. America is no exception in this regard (see Stephen Kinzer's book Overthrow). The thirty-three-page National Security Strategy of 2002, for example, praised American democratic capitalism as the "single sustainable model for national success," and "right and true for every person in every society." We would export our way of life "to every corner of the globe," said the NSS, and we'd act unilaterally and preemptively against any nation that tried to thwart us. Needless to say, some countries didn't like such hubris.

The attackers were partly motivated by their hatred of western values: secular democracy that separates church and state, religious pluralism, freedom of speech, freedom to vote, the privacy of the individual, and toleration of dissent. For Muslim extremists and conservative Americans this tends to be a black-and-white view of the world with little middle ground or ambiguity. Nations are "either for us or against us," Bush famously said. On one side there's an "axis of evil" that wills us harm, and on the other side enlightened people who champion the true, the good, and the just. I don't find this view helpful; the "Arab Spring" shows that many Muslims aspire to some western values.

Other people point to American foreign policy. A 1998 fatwa by Osama bin Laden and others objected not to our values but to three specific "crimes and sins"—our support for the United Nations sanctions against Iraq (1990-2003) that hastened the deaths of a million citizens (UNICEF says that 500,000 children died as a result of the sanctions), our biased support for Israel to the detriment of Palestinians, and the presence of our numerous military bases in their sacred Muslim lands. The fatwa also mentioned America's plundering of Arab resources, support for abusive regimes, and undermining self-determination by dictating policy.

In this view, the 9/11 attacks were a classic case of "blowback." Blowback, said Chalmers Johnson, is "another way of saying that a nation reaps what it sows." What many people "hate" about America, Johnson argued, is our global militarism and predatory economic policies that virtually assure retaliations against us for decades to come. Instead of acting prudently, we have acted with what has become predictable condescension toward other nations and with myopia about the consequences. Our overwhelming and global military-economic threat, exercised with little fear of retaliation, is "seeding resentments that are bound to breed attempts at retaliation."