We Didn't Know You Were Coming!

September 06, 2011 by Lisa Mladinich
"Like" the Patheos Catholic Page on Facebook to receive today's best commentary on Catholic issues. 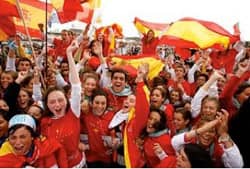 Therefore keep watch, because you do not know the day or the hour . . . When the Son of Man comes in his glory, and all the angels with him, he will sit on his throne in heavenly glory ~ Matthew 25: 13, 31

A friend of mine was in Madrid last month for World Youth Day, and was joyously overwhelmed by the presence of 2 million devout, beautiful young people, passionately in love with Jesus Christ and His church. There are "thousands of stories" to tell, she says, but one stands out.

She recalls a conversation with a dynamic young man volunteering as part of a campus ministry team at an American Catholic college. The ministry's advisors at first tried to bully him out of his orthodoxy, he said, insisting that his work with students include an appreciation for Buddhism and Native American spirituality.

My friend was not surprised. Tragically, the list of Catholic colleges that have not only deserted but grown hostile to their Catholic identities is very long, indeed. More surprising was that he stood up to the powers that threatened to censor him and established a beachhead for authentic Catholicism, a thriving ministry with a substantial and growing membership.

It's another potent sign among many, my friend told me joyfully, that the tide is turning and that young people, nourished by sacramental life and inspired by the examples of leaders like Pope Benedict XVI and Blessed John Paul II, are at the forefront of this reforming, redeeming tide.

Thrilled by the faith and courage of the campus minister's story, she shared with him the long, desolate spiritual path she had traveled, growing up in the immoral, anti-religious environment of the 1970s and '80s. She exclaimed exultantly, on behalf of her generation (and mine), "We didn't know you were coming!" To which he replied, "Thank you for persevering in darkness, for preparing the way for us."

There are so many great signs of God's power all around us. I'm a big fan of the 40 Days for Life Campaign, an organization that has helped close down several abortion clinics for lack of business and converted to the pro-life cause a number of Planned Parenthood employees, such as Abby Johnson and, more recently, Ramona Trevino. Their latest campaign starts at the end of this month in towns and cities all over the U.S. Through their peaceful, prayerful efforts to love both the women who seek abortions and the people who provide them, hearts are being emphatically changed.

As we prepare to begin another year of catechesis, my prayer to Almighty God is to infuse everything we do with this same divine hope, brimming over with love, to strengthen us in holy perseverance, so that our efforts, too, will bear visible and lasting fruit.

May God bless, inspire, and strengthen you!

In His Peace,
Lisa