Why Are Catholics Obsessed With Sex?: Sex and Christianity, Part 5 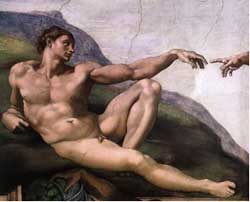 There is a spiritual DNA that comprises two deep yearnings in the human heart: one, for the physical touch of another human being; and the other, for the love of God. The experience of desire, of longing, is at the root of both prayer and sex: and so Christian faith will always be inextricably linked to sex. Both faith and sexual desire arise from places in the heart that can neither be named nor fully understood. Their spontaneity can surprise and overwhelm us, even when cultivated. They confront us with the reality that we are never fully masters over our own selves.

The roots of this sex- and God-obsession are Biblical. The prophet Jeremiah could describe God as having "seduced" him (20:7). The prophet Hosea wrote of God commanding him to marry a harlot, in order that he might understand the deep wound of adultery as an analogy for God's own feeling slighted by Israel. Later, the Song of Songs provided a dramatic, erotic image for the way that God pursues the human heart like a lover for his beloved. (The first century Rabbi Akiva once described the Song of Songs as the "Holy of Holies," describing as it does the kind of intense love one ought to have for God.)

In the New Testament, Paul proposes that the heart can, ultimately, have only one true object: "it is better to marry than to be aflame with passion" (1 Cor. 7:9). He intuits at this early stage of Christian life that sex can derail a heart's yearning, and turn its focus away from God and toward the body. Later, Saint Augustine, reading Paul through the lens of his early study of the Greek philosopher Plato, would come to see his own (extensive) experience with sex as a stumbling block to his coming to know God. At a significant point in his own process of conversion to Christianity, he would utter the prayer "Lord make me chaste--but not yet!" (Confessions 8.7.17). Augustine was right to understand that sex was a powerful expression of desire, and that if misdirected, it could lead to addiction. What he failed to understand, though, was that if integrated into the search for holiness, sex too could be part of the gift of self to God through the other. (It would take centuries more reflection to hit that note.)

Catholics are sex- and God-obsessed in equal measure because they have, over history, tasted the depth of both of those expressions of desire. And they understand on some deep communal level, buried under centuries of tradition and the conspiracy (Latin "breathing together") of shared desire, that getting sex right means a good deal toward getting God right, and that conversely getting sex wrong will almost certainly mean getting God wrong. For sex is never only about bodies, and the human grasp of God can never wholly abstracted from bodies. Ours is an incarnational faith, meaning that Christ's taking on of human flesh meant everything that human flesh signifies. Christ's transformation of that human experience means, among other things, the transformation of sex, too—not the abolition of it, not the running away from it, not the stingy finger-wagging in the direction of any talk about it. No: the transformation of sex from something merely titillating, exciting, endorphin-producing, into something that drives us closer and closer to sanctity, because through it we mysteriously reach out to others in love.

How I wish, when I am my best self, I could love the way that Jesus did: to be free from any ill motives when dealing with those I find attractive, and to simply reach out in love. I know I have been guilty of acting differently toward those to whom I feel an attraction, and at those times I sometimes wonder what it would be like to simply love with the kind of abandon that Jesus showed at the wedding in Cana, or with the Samaritan woman at the well, or with the woman caught in adultery, or with the woman with a hemorrhage. I like to think that perhaps Jesus found some of those women beautiful, and yet simply reached out in love to all of them the same.

I have hints of that kind of freedom when I act in loving ways toward my wife, and echoes of that freedom when my daughters or my students summon from me gifts of presence. Marriage and fatherhood, for me, constitute a school of desire, and I find that this training in generosity bears fruit in both ordinary life and in prayer at roughly the same speed. So my own obsession with sex (I guess) is rooted not in any sort of lurid venereal delight, but rather in the sense that there is a depth to sex--that is, to our spiritual/relational DNA—matched only by the depths I find in prayer.