About Scott Poole: Author of "Monsters in America" 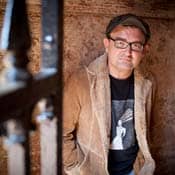 Now Featured in the Patheos Book Club:
Monsters in America
Out Historical Obsession with the Hideous and Haunting
By W. Scott Poole

Scott Poole grew up in love with monsters. Shock Theater on Saturday afternoon left him deliriously terrified as he watched Dracula, Frankenstein, Bride of Frankenstein and The Wolf Man. Comic books like Tomb of Dracula and fan magazines like Famous Monsters offered even more frightening fun. After seeing Star Wars for the first time, monsters became a religious experience with Tuskan Raiders, the Cantina scene and Darth Vader all becoming beloved friends and nightmares.

Somehow—and even Scott's not quite sure how—he translated his love for monsters into a career as a historian and pop culture critic. A tenured professor of American History at the College of Charleston, he teaches a popular class about the image of the Devil in religion and popular culture and, of course, a class on America and its monsters. He is the author of several books dealing with race, religion and pop culture including Satan in America: The Devil We Know

and is a regular contributor to www.PopMatters.com, an international magazine of cultural criticism.

Scott lives with his partner Beth Phillips in a restored 1930s worker's cottage in a part of Charleston, South Carolina where tourists fear to tread. Beth and Scott share this adventure with Max their rescued Greyhound and Shiloh, an elderly Labrador. When not writing and teaching, he collects blues, rock, punk, classic country, alternative and all manner of roots music on vinyl. He plays it all too loud. A long-time vegetarian, Scott enjoys explaining to other vegetarians why they should watch The Texas Chainsaw Massacre or bringing up the notoriously bloody film when his friends are trying to enjoy their hamburgers. He rides his bicycle to work every day allegedly because its good for the planet but mostly because its fun. And if you ask, he will likely let you see his comic book collection.

He wants to get a Bride of Frankenstein tattoo but is scared of needles and his mom. Maybe he'll do it anyway.