This mysterious story is a continuation of the remarkable tale of the calf and Aaron's massive lie that characterized chapter 32. Earlier in chapter 33 we learn that Moses has a very special privilege with regards to YHWH; he alone goes into the tent of meeting, that moveable tabernacle of the wilderness, to converse with YHWH "as one speaks to a friend" (Ex. 33:11). Little wonder that YHWH and Moses have become so close, after Moses convinced his God not to destroy the people in spite of their evil at the base of God's mountain (Ex. 32: 11-14). Such intimate dialogue often brings friends close indeed.

But now, I would suggest, Moses forces his relationship with YHWH to dangerous and finally unsustainable levels. They may be friends, but YHWH is still YHWH, as the amazing dialogue of these verses now reveals. "Moses said to YHWH, "Look, you were saying to me, ‘Bring up this people,' but you have not made it known to me whom you will send with me; yet you have said, ‘I know you by name and also you have found favor in my eyes'" (Ex. 33:12). What exactly is Moses saying here? First, you told me to bring the people up (out of Egypt?), and I have done that. Second, you promised me earlier (Ex. 4) that you would send Aaron with me to speak to pharaoh. He did that, but now he has brought great evil on the people. So, whom do I get now to help me in the great task of bringing the people into the land of promise? Third, you have claimed to know me intimately, by name, and have made me your friend. Furthermore, I have found "favor" in your eyes just like my ancient ancestor, Noah (Gen. 6:8).

Moses' list of his accomplishments and God's apparent approbation of them leads the lawgiver to make an extraordinary demand on his God. "If I have really found favor in your eyes, then let me know (or "show me") your ways in order that I can know you and find favor in your eyes" (Ex. 33:13). This is what Moses appears to want. If I am genuinely favored by you, if I am really like the fabled Noah, then reveal to me what it is you actually do. I mean, how you finally can be defined. That way I can know you, understand who you are, and then be convinced that I have in fact found favor with you. Moses appears to want nothing less than a peep at YHWH's selfhood, God's essence, perhaps even God's being. And he adds, "Please note that this nation (goy) is in fact your people." That addition seems to bolster Moses' demands to know God more intimately; after all, if the people YHWH has called Moses to lead are actually YHWH's people, and not Moses', then Moses must know God deeply, truly, if he is to do the work that God has called him to do with precisely this people.

But YHWH appears to put Moses off a bit. "My face (presence) will go with you and I will give you rest" (Ex. 33:14) (We note that the word "rest" is built from the root from which the name Noah comes.) YHWH does not show Moses God's "ways" but promises instead God's presence and rest (remember Ex. 3:12 when God's promise of presence with Moses at the bush is apparently not heard by the fearful man, anxious to escape the call to Egypt). And again here Moses does not hear God clearly. Moses responds to God's promised presence, "If your face will not go, then do not carry us up from this place. How will it be known that I have really found favor in your eyes, I and your people, if you do not go with us? Only then will we, I and your people, be distinct (or "be extraordinary") from all peoples on the face of the ground" (33:15-16). YHWH's certain promise of presence is met with Moses' fear that God will not go with them at all!

I can only imagine that the reluctant and recalcitrant Moses at the bush has reappeared here. He does not listen carefully to his God, and he demands absolute assurance of God's presence before he takes one more step toward the land of promise. But once again the graceful YHWH reassures God's choice. "YHWH said to Moses, ‘This thing which you have asked I will do, because you have found favor in my eyes and I do know you by name!'" (Ex. 33:17). In effect, God says, do not miss what I have now said twice: you are favored and known by your God.

And Moses now demonstrates that he has listened at last by asking the most astonishing thing of God he could ever ask: "Reveal to me now your glory!" (Ex. 33:18). More than God's ways, God's actions, Moses wants to look right into the heart of YHWH. But he has now gone too far.

"I will cause all my goodness (tov) to pass before your face, and I will announce before your face the name ‘YHWH;' I will show favor to whomever I show favor and mercy on whomever I show mercy. But you are not able to see my face, for no human being shall see me and live!" (Ex. 33:19-20). You may know my name, says God, as mysterious as that is, and you may know that I am free to act with favor and mercy with anyone I choose, including you, but my face, my glory, my essence, my person is forever hidden from any human being, even from you, Moses, my great friend.

Saint Cedd: A Life of Reaching Out
John D Gee
2 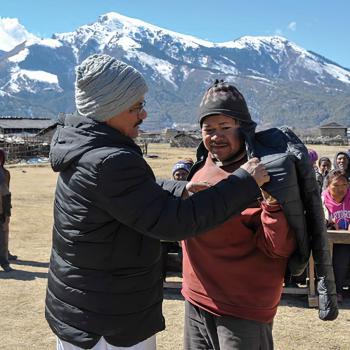 Parents Who Let Baby Die Because "God Makes No Mistakes" Win Major Court...
Hemant Mehta
Get Patheos Newsletters
Get the latest from Patheos by signing up for our newsletters. Try our 3 most popular, or select from our huge collection of unique and thought-provoking newsletters.
From time to time you will also receive Special Offers from our partners that help us make this content free for you. You can opt out of these offers at any time.
see our full list of newsletters
Editor's picks See all columnists