The Battle for Life Goes On

October 06, 2011 by Marcia Morrissey
"Like" the Patheos Catholic Page on Facebook to receive today's best commentary on Catholic issues. 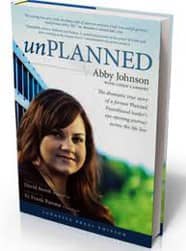 Ed and I recently attended the Pro-Life Action Ministries (PLAM) dinner to hear a speech by Abby Johnson, the former Planned Parenthood director-turned-pro-life-advocate. I had recently read her book Unplanned, which I can't recommend strongly enough. It was an eye-opener on many levels.

Her hour-long talk was so compelling that I don't have room to cover it all in this column. Ed wrote a post on his website which gives some of the points that we both were most struck by. He has linked to some of her speech, which we recorded; it's well-worth listening to.

Abby joined Planned Parenthood as a volunteer in 2001, while a college student. This led to an eight-year career with the organization and her eventual awakening to the truth. She says in her book that she was naive and that she bought the talking points of the recruiter. Abby had always been a compassionate person, and just wanted to help women in crisis—a goal she thought the organization shared.

However, when she was asked to help with an ultrasound-guided abortion in 2009—something her office usually didn't do—her eyes were opened wide, and she was confronted with what she had been a part of these past eight years.

She had seen pro-life sidewalk counselors daily outside the gates of her clinic those eight years. They had showed genuine compassion and offered peaceful prayers. They were friendly and kind to all who entered—including her and her staff. She feels that they saved her life.

Abby began to see the stark contrast between the pro-life's mind set of life nurturing, long-term solutions, and the Planned Parenthood "quick-fix" immediate answers. The problem is that for so many, it isn't quick-over-and-done-with. Many live for years with the regrets and long-term damage caused by this "quick fix" to a crisis-pregnancy.

She now works full time with the pro-life movement, and with Lila Rose in her work to expose Planned Parenthood and the whole abortion industry, among other projects to save lives.

Abby said it isn't enough to just make abortion illegal, because if it was, the next day abortions would still take place. We have to change the culture—we don't live in a culture right now that respects life, and that is what the pro-life movement has to change. She says that she tells people that she has always been a single-issue voter, and it has always been about abortion—now she just votes pro-life.

At a 2008 Planned Parenthood conference she attended, she heard presenters talk openly about implementing telemed chemical abortions. This can be achieved by a doctor in another city, who will speak to the woman via webcam, and push a button through the keyboard to open a cash register where the "abortion pill" is sitting. They find loopholes to get around the state law that a doctor has to dispense the medication.

The pro-life work has to be diligent. We have the Congressional investigation right now, which is exciting. Abby said that much of it is designed with the help of former abortion workers who know how the industry works. But also, "We have abortion clinic workers leaving the abortion industry at an astronomical pace. There are babies being saved in record numbers, and clinics being shut down."

This is the good news, but one in three women are still having abortions.

She warned that Planned Parenthood will not take this sitting down—they are always planning. They are building a huge facility in Minneapolis, like the one in Houston where her office headquarters used to be, where they perform about 75 abortions a day, six days a week.

On August 15, I went with friends to a peaceful prayer rally in front of this mega-center under construction. We were very careful to stay out of the workers' way and be respectful. There were over 400 attendants on that hot August day. At one point, because this facility is scheduled to open in December, we sang Silent Night. It gave me chills—that is my favorite Christmas song, and I will never hear it the same way again.