Becoming a Snake-Handler: The Friday Five with Brian Goins

Brian Goins has developed numerous study guides, workbooks, and Bible ministries, including Insight for Living (with Chuck Swindoll) and Walk Thru the Bible. The lead pastor at Renaissance Bible Church in Concord, North Carolina, he's a frequent speaker at Family Life's marriage conferences.

Recently, Brian released a terrific new book for men on the subject of marriage, called Playing Hurt. He stopped by today to answer questions for today's Friday Five.

As an avid sports fan, I love how you tie in marriage and sports (two things created in Heaven, right?). How did this idea develop?

And on the eighth day God created the North Carolina Tar Heels...

I was teaching at a marriage conference recently where we split up the wives and the husbands. When we were finished, one of the men attending the conference handed me a cartoon he had just drawn. It featured three panels. On the first panel, a man and a woman walked into their separate sessions. The second panel revealed the ladies walking out of the session laughing and talking. The third panel showed the guys walking out covering a very sensitive part of the male anatomy. And I get it. Even though I was teaching the men from Scripture, the whole hour felt like a kick in the...you get the picture.

I was heaping out guilt more than grace; how to love their wives, but not why men are called to love their wives. We as a church yell at men, "Man up! Love your wife!" but we offer no compelling picture of being a husband outside of duty—it's what you ought to do.

Most men are devoted to sports in one form or another. You don't have to tell them to love their team, sacrifice for their team, cheer for their team, spend money on their team, go out on dates with their team. They do all of those things out of devotion. They do they because they feel, innately, a sense of glory attached to sports. That's why men will sit around the barber shop or at the bar reliving the old "glory days" of big games that get bigger as memories fade.

Men sacrifice, serve, and are devoted when they know that glory is on the line—but it doesn't take long for the glory day of our wedding to start feeling ordinary. She changes from the wedding dress into gray sweats. His hair migrates from his head to his back.

It's time to reclaim the glory God intended for marriage. In Paul's playbook for husbands, Ephesians 5, Paul calls marriage a "profound (great, mega) mystery" that symbolizes the union of Christ and the church. In other words, every marriage—for better or worse—reveals the glory of God to a watching world. When husbands catch that vision, I believe that they will, with God's help, step up and love like Christ.

You write this book specifically to men. Are most marriage books written with a more feminine slant?

Most book buyers carry a purse—and publishers are savvy. If they don't cater in some way to the feminine demographic, they won't be publishing for long. So I tried to write Playing Hurt with two assumptions: men love sports and if men read, they read short books. With the rise of tablets and e-readers, I think we will see more men pick up books. Most guys could read Playing Hurt in a 3-hour plane ride.

You encourage guys to "play hurt" in their marriages. Can you explain what you mean by this?

Many husbands struggle to answer questions from their wives, "Did you know today was our anniversary?" "Why don't you understand me?" or "What's on your mind?"

But almost every man I know can answer the question, "Who is your favorite athlete who played hurt?" They may re-tell the story of Kirk Gibson in the World Series, Michael Jordan fighting through the stomach flu in game 5 of the NBA Finals against the Utah Jazz, or—though he'd never admit to watching women's gymnastics—Kerri Strug landing that vault in the 1996 Olympics.

Whether it's on the ball field, or on the battlefield, or in the boardroom, we men will dig deep and play through pain to get the win, save our buddies, or secure the sale. But in the arena of marriage, when our egos get bruised, our expectations broken, or our libidos starved, men seek the bench. We pout. We pounce in retaliation. But we rarely play through our pain for the chance at victory in marriage. In those moments I believe God looks down the bench and says, "Goins, I need you in the game!"

The Crosses: A Heretical Reconciliatory Theology of Liberation
Jeff Hood
3 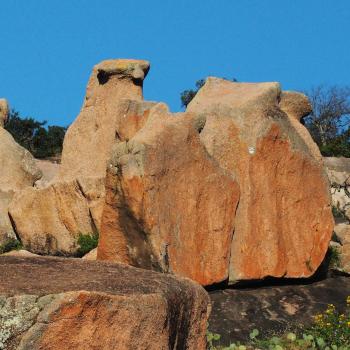 Rock Stars, Pop Stars, and One Hit Wonders in the Pagan World
John Beckett
Get Patheos Newsletters
Get the latest from Patheos by signing up for our newsletters. Try our 3 most popular, or select from our huge collection of unique and thought-provoking newsletters.
From time to time you will also receive Special Offers from our partners that help us make this content free for you. You can opt out of these offers at any time.
see our full list of newsletters
Editor's picks See all columnists