The Blessing of Down Syndrome

October 02, 2011 by Tony Rossi
"Like" the Patheos Catholic Page on Facebook to receive today's best commentary on Catholic issues. 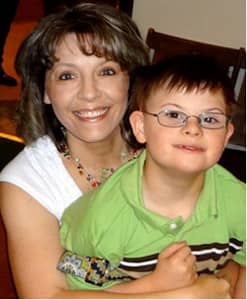 When Atlanta resident Andrea Roberts gave birth to her son Reece in 2002, she and her husband experienced a great deal of fear and anxiety. Reece, they discovered, had Down syndrome. The hospital sent Andrea home with a packet of papers to educate her about Down syndrome, but she was too emotionally distraught to see anything but a bleak future for her son and family.

Eventually, Reece started to smile. A lot. Andrea recalled to me on Christopher Closeup, "That personality and that glow that is so much a part of Down syndrome started to come out and grow . . . It was easy to get to the other side emotionally and to recognize that this wasn't a horrible burden." Andrea's life would soon change in even more dramatic ways, leading to her being a force for good for children and families worldwide.

In 2004, a nurse from the hospital who remembered Andrea called her to say she was starting a social service program for families with Down syndrome children. The nurse wanted to call the program Reece's Rainbow. Andrea was happy to let her use Reece's name, and agreed to personally visit with the families while they were still in the hospital. She would tell them, "I've been in that hospital bed and I know how you're feeling. It's going to be different sooner than you think."

It was also during this time that Andrea came to lean more on her faith. Though she was raised in the Methodist church, she and her husband weren't regular churchgoers when Reece was born. His Down syndrome turned out to be "a wake-up call faith-wise for our family and has certainly been the driving force in . . . recognizing that God has a purpose for each of us."

In order to help other kids with Down syndrome, Andrea started volunteering at an agency in her area that supported orphans in Ukraine. She was appalled to discover that these children overseas were often abandoned and placed in institutions where they were abused and neglected. She said, "It became a personal mission to get those kids out of those orphanages, to use the gift of adoption to educate and share the light of Christ and the light of truth with families, orphanage directors, and caregivers in those countries."

With a background in marketing, Andrea built a website by herself, and appealed to the people in her church for help. She soon facilitated adoptions for five Ukrainian children by U.S. families, and the project just kept growing. Reece's Rainbow has now become an international orphan ministry that has helped find adoptive families for more than 500 Down syndrome and special-needs children. Earlier this year, the ministry gained widespread attention when Emmy Award-winning actress Patricia Heaton (Everybody Loves Raymond, The Middle) started promoting them on Twitter and donated $10,000 toward their work.

Though nearly 90 percent of unborn children diagnosed with Down syndrome in the U.S. today are aborted, Andrea Roberts says, "There is a growing group of people who . . . would give their left arm to adopt one of these children . . . I think one of the blessings of Down Syndrome [children] is that they don't really have an understanding of malice. They love people, they trust people innately. If anybody was ever to do them wrong, they would be hurt by it. But whatever that extra chromosome does to their brain function, it makes them able to . . . forgive and forget."

Andrea Roberts embodies the essence of what it means to be a Christopher, a Christ-bearer. Motivated by her love of God and her fellow human beings, she took the initiative to right a wrong in our world—the abuse and neglect of children. What made her think she could make a difference on a worldwide scale? As she explained to me very simply, "When God says 'Get up and go,' you go."