Breaking Down the Gender Barriers 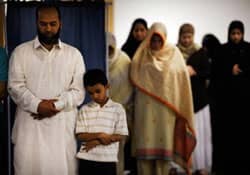 I get some interesting looks when I suggest that the physical barrier that was recently put up between brothers and sisters for Jummah at my school be taken down. They probably think it is odd that a bearded, refreshingly conservative, practicing Muslim brother would dare suggest that there be nothing but chairs separating the brothers and sisters during the khutbah and salah. But I have good reasons.

It began last year, when the older generation of our MSA was completely phased out when the last few students who participated in the "glory years" finished their degrees and graduated. Then, a new group of brothers and sisters took the reins and inherited the responsibility of leading one of the largest Muslim student organizations in the State, if not the country.

For the most part, the new shura (council) kept with tradition in most practices of the previous MSA. The prior council's success with establishing such a large Muslim body on campus was proof that they were doing things right. So, it was a no-brainer to stick with what they did. There were a few things, however, that changed. One of them was the issue of setting up a barrier for our Friday prayer to physically separate the men from the women. This barrier, I was told, was to protect the khateeb from seeing the women while he was speaking, so he can focus and control his gaze. This was a more intense measure than what the previous MSA Council did; they usually lined up a row of chairs to designate and distinguish the men's section from the women's.

"Modesty," you say, "is an important value in Islam, AbdelRahman. Shouldn't you be a proponent of a tall physical barrier to promote ideals of modesty?"

That's a great question, reader. I definitely support modesty between men and women in Islam, most definitely. But this situation is a bit different.

Anyone who has taken a speech class—scratch that, anyone who has ever talked to another human being—knows that not all aspects of communication are verbal. When we talk, we may or may not make facial gestures, hand motions, and other physical movements to help get our point across. In fact, studies show that 70 percent of communication is rooted in something called paralanguage: an auxiliary form of communication that includes everything except speech. In this specific example, the aspect of paralanguage that is most important is called kinesics, more commonly referred to as body language. Putting it in simple terms, the motions a speaker makes during his speech directly improves or worsens the delivery of his message.

Do you see where I am going with this?

When I had presented this concern to the brothers who coordinate the Jummah khutbahs (Friday sermons) at my school, one of their responses was a small retort that shocked my ears and saddened my heart. With an uninterested face, he replied, "It's not even obligatory for them to come anyways."

In an event as important and essential as the Friday khutbah, we cannot compromise the effectiveness and impact that it can have on any of the attendees, and that includes the sisters. In fact, the sisters may be more important attendees in certain cases than the brothers. The average brother, though he may not realize it, has many more opportunities to interact with Islamic scholars, teachers, and personalities than the average sister does. For most sisters, the Jummah khutbah is the only time they can attend a direct discourse from a respected speaker, outside of conventions and special programs that come every so often.

Why have we adopted this mentality that "the sisters don't matter, because they don't have to come anyways"? Just cover them up and let them stay in the kitchen and give birth to children. The message we are sending our sisters—the mothers of our kids, the mothers of our Ummah—is that their jobs are menial at best.

These same brothers who feel the need to unnecessarily force women behind a blanket are also those who complain most about the onslaught of liberalism and feminism against our sisters. If they would only realize that their unnecessary repression of Muslim women is a direct cause of the future mothers of our Ummah lashing out in rebellion. There is a balance we must achieve, however fine the line may be.

Living in America—and now more than ever—it is essential that we provide as many educational and social opportunities to our sisters as possible, and this includes the Friday khutbah. Do not let our sisters be spiritually handicapped by not allowing them to have the full heart-changing experience of a good khutbah. We need to make sure they have full access to receive the complete message on Fridays, to be able to see what is happening so their hearts are energized for the next week—whether it is at home or at work.

But more importantly, let us be careful not to reinforce the idea that sisters are second-class citizens in Islam, that a room with a garbled sound system and terrible ventilation is sufficient for their educational needs.

Even more importantly, let us refrain from strengthening the notion that they should not even come to the masjid—because if we do not have strong, educated, spiritual, and active sisters in this Ummah, we are in deep trouble.

May Allah guide us toward what is best, and He knows best.

What are your thoughts on the issue? Do you agree? Disagree? I would especially like to get the sisters' feedback (both for and against the barrier).