October 04, 2011 by Lisa Mladinich
"Like" the Patheos Catholic Page on Facebook to receive today's best commentary on Catholic issues.

You will go out in joy and be led forth in peace; the mountains and hills will burst into song before you, and all the trees of the field will clap their hands. Instead of the thornbush will grow the juniper, and instead of briers the myrtle will grow. This will be for the LORD's renown, for an everlasting sign, that will endure forever." (Isaiah 55:12-13) 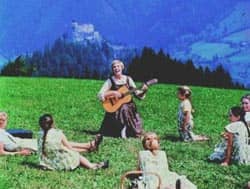 I had taught religion before, I had run an adult education committee in a previous parish, I had a lot of experience creating and running educational programs for children. But because of my new and life-changing relationship with Christ and his Church (which I shared last week), the day I taught my first religion class was completely different from any of my past experiences. I knew that at 4:15 p.m. that afternoon, I'd be standing in a room with twenty-four tired children and an hour to fill meaningfully. I'd have to find a rapport and establish discipline, keep their attention and manage to teach them something about the subject dearest to my heart.

An experienced first-grade teacher would attend my first class, so she'd be there to bail me out if I floundered in the lesson or lost control of the children. But she'd also be there to carry the tale of my failure to the Director of Religious Education and the rest of the volunteer staff. After years of performing and teaching in environments in which the mere mention of God could have gotten me ostracized (and sometimes did), I wanted more than anything to shine with His light unfettered, to preach the Good Word and rouse little minds and souls to the Truth that had set me free.

Having managed to put off the inevitable—my first lesson plan—until the actual day of the first class, I sat on the couch with my first-grade teacher's manual open, so panicked that I was unable to follow the lesson plan matrix provided. I flipped pages, tried to read the chart and finally, after some time had been wasted, put the book aside in despair. In that moment, I recalled Jesus' words to His apostles at the Last Supper: "I will not leave you desolate; I will come to you." (John 14:18) Prayerfully repeating these words calmed and focused me and would sustain me in the weeks to come.

I turned to the textbook again, noticing the "enrichment" section for the first time. It was a brief essay on the Church doctrines underlying the lesson, backed up with notations from The Catechism of the Catholic Church. This section was not for the children's betterment, it was for mine. I squirmed, tempted to skip it. Hadn't I read enough, listened to enough, evangelized enough not to need this? How much could I possibly need to learn to teach a six-year-old?

The clock was relentlessly spinning, but I forced myself to take a few minutes and read it through, even cross-referencing the short passages with their corresponding entries in the Catechism. And here's a clue to how the Holy Spirit works when we act in humility: That small act of submission brought me valuable insights and a measure of peace.

I went back to studying the chapter outline. As I sat there, I remembered attending a birthday party thrown by a veteran kindergarten teacher, a dear friend, awed by the way she'd kept things moving. Her sense of rhythm was uncanny as she varied the activities from active to passive, active to passive, keeping the children happy in a balanced ebb and flow.

Another memory sprang to mind; Kimberly Hahn, the well-known Presbyterian convert to Catholicism, witnessing to the power of the sacraments and singing a scripture verse so that her audience would be sure to remember it. Thirteen years later I could recall it word for word. I penciled the idea in, including the scripture, which read, "He who began a good work in you will be faithful to complete it." (Phil 1:6)

Within an hour, I had my first class mapped out. I would pray with the children, introduce myself and sing something I called "The Hello Song," a standard way of making joyful contact with the children at my school and library performances, then impart classroom rules, perform a puppet show about respect, discuss Baptism and the idea of sacraments, sing to them again (Phil 1:6), read them a Bible story on the rug (Genesis 1), chat with them about God's beautiful creation, teach them a song with movement from our text book and close with the reading of a short children's story on prayer. I was pretty sure the kids would enjoy it, but I was a little scared that my presentation might not be serious enough to pass muster with the adult observer.

After class, the supervising teacher said, "You don't need any help. That was amazing!" I felt a giddy surge of exultation. I reveled in the thought that she would bear this news to others and that my reputation as a class-A teacher would be established.

And then I remembered that class would meet again the very next week—and the next and the next. And there were all those lesson plans to create, and all those concepts and dogmas to impart with clarity and reverence and verve. And I sobered right up.

Note: Come back next week for "A Catechist's Story, Part III: Growing Pains."