Christian Haunted Houses: Scaring the "Hell" Out of Teens? 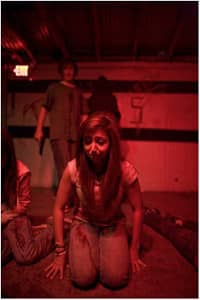 Christian haunted houses are an odd form of attractional ministry. While many church youth programs seek to draw in teens with video games, junk food, and paintball, these "hell houses" attempt to attract adolescents with promises of gore, violence, and Halloween scares. But it's only once participants get in the door that some discover it's all been a bait-and-switch. The goal is not just to scare them, but to evangelize them.

"Part of salvation is being afraid of going to hell," says the youth pastor at Trinity Church Assemblies of God in Cedar Hill, Texas. As depicted in the excellent documentary Hell House, each Halloween season Trinity Church hosts an alternative to the traditional haunted house. Instead of vampires and werewolves, guests are treated to scenes such as a young girl having an abortion, a gay man suffering from AIDS, a teen dying in an auto accident who failed to give his life to Christ. In each scenario, these presumed sinners are tormented by actors dressed as demons. The implication, none too subtle, is that each deserves both their suffering and their one-way ticket to damnation. The gay man, molested by his uncle as a child, chose to have sex and contract HIV. The teen girl chose to get drugged at a rave, raped, and become pregnant. The boy in the car wreck chose hell because he refused to listen to his parents' religious teachings. The message of these hell houses is that the same fate awaits us all. But wait! There's hope. These terror tours usually end with a glimpse of heaven and the opportunity to give one's life to Jesus.

Similar scenes are played out in hell houses across the country. Typically they are sponsored by fundamentalist church youth groups who spend months preparing, building sets, making costumes, and rehearsing their lines. All in the name of evangelism. Some are more heavy-handed with the hellfire and damnation and some tend more to the biblical than the cultural. One colleague mentioned to me a popular Christian haunted house experience in Tulsa that he describes as "a kind of intense stations of the cross (including a bloody recreation of Jesus being whipped) and intended to scare you into salvation."

But all these hell houses, supposedly aimed at pointing teens toward wholesome lifestyles, reek of irony. In their efforts to offer a Christian alternative to supposed pagan elements of Halloween, they end up using the worst cultural elements to attract teens: violence, sex, blood, and carnage. Perhaps most telling, according to the director of the Hell House documentary, is the apparent excitement expressed by the Christian teens who help to organize and present the gruesome scenarios. It's clear that the youth involved are partially motivated just by the sheer enjoyment of getting to play out the violent tableaux. At the end of the Halloween season, Trinity Church actually hosts a dress-your-best ceremony where awards are presented for the best "abortion girl" performance, best "girl raped at the rave" performance, "best demon," and so on. The cavalier attitude they take to the whole affair is disturbing.

Perhaps most disturbing is that churches in 2011 are still using fear of divine punishment as a way to attract and evangelize teens to Christianity. Do we really want youth believing that joining the faith is all about avoiding God's wrath? I suppose this theology fits well with the recent controversial words of Mars Hill pastor Mark Driscoll who declared: "Some of you, God hates you. Some of you, God is sick of you. God is frustrated with you. God is wearied by you. God has suffered long enough with you. He doesn't think you're cute. He doesn't think it's funny. He doesn't think your excuse is meritous [sic]. He doesn't care if you compare yourself to someone worse than you, He hates them too. God hates, right now, personally, objectively hates some of you." One has to wonder if Christians like Driscoll and the sponsors of hell houses have forgotten that the gospel is intended to be good news. If the only good news we have to share is that we better pick the right team or we're going to hell, aren't we offering teens a faith that is self-serving rather than self-giving? Aren't we offering them a God who acts a lot like us rather than a Christ who loves unconditionally?